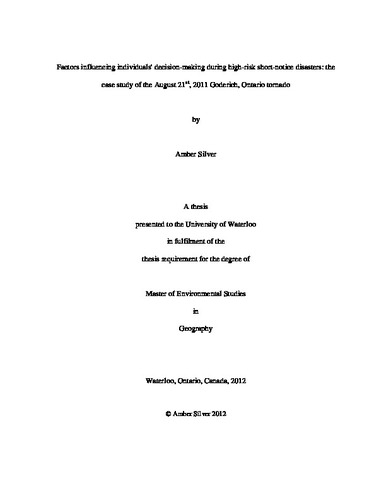 The hazards literature has identified many factors as being influential in the decision making process during high risk, short-notice disasters. Risk perception and previous disaster experience are commonly identified as two of the more influential factors in this complex process. However, few studies adequately address the complex role(s) that these factors play in self-protective decision-making during successive high-risk events. In particular, the role of previous disaster experience during subsequent events is still a matter of considerable discussion and inconsistent findings. This thesis examines two events that occurred in August, 2011 in Goderich, Ontario: an F-3 tornado that struck the community on August 21st and a tornado warning that was posted for the region three days later on August 24th. This case study provided the opportunity to examine the roles of risk perception and previous disaster experience in the decision-making process during successive high-risk events. Semi-structured interviews (n=35) and close-ended questionnaires (n=268) were conducted to learn about the ways that individuals obtained and understood risk information, and to explore whether and how such information guided protective behaviors during the two events. The interviews were analyzed using thematic coding to identify response patterns, and the questionnaires were analyzed using IBM SPSS software. It was found that a sizable portion of the sample population took protective actions on August 24th in ways that were inconsistent with their actions on August 21st. Also, a significant portion of respondents chose not to take any form of protective action on August 24th despite having previously experienced the damaging tornado. The findings of this research suggest that the significance of previous disaster experience in the decision-making process is highly variable and context-dependent. A second significant research finding involves the impact of the tornado on the place attachments of Goderich residents. It was found that the disaster had significant impacts, both positive and negative, on participants' sense of place. These findings have implications for both short- and long-term disaster recovery.