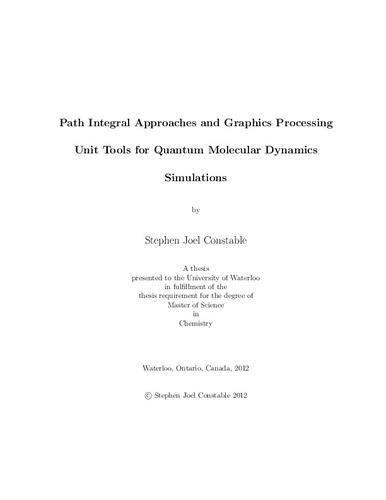 This thesis details both the technical and theoretical aspects of performing path integrals through classical Molecular Dynamics (MD) simulations. In particular, Graphics Processing Unit (GPU) computing is used to augment the Path Integral Molecular Dynamics (PIMD) portion of the widely available Molecular Modelling Tool Kit (MMTK) library. This same PIMD code is also extended in a different direction: a novel method for nuclear ground state property prediction is introduced that closely mimics existing code in functional form. In order to add GPU computing capabilities to the existing MMTK codebase, the open source Open Molecular Mechanics (OpenMM) library was used. OpenMM provides high performance implementations of a variety of commonly used MD algorithms, with the goal of supporting current and future specialized hardware. Due to the object oriented nature of both codes, and the use of SI units in each, the development process was rather painless. The integration of OpenMM with MMTK is seamless, and arbitrary systems are supported without the user even needing to know that GPU acceleration is being used. The hybrid OpenMM-MMTK code is benchmarked against the vanilla MMTK code in terms of speed and accuracy, and the results show that GPU computing is the obvious choice for PIMD simulations. Starting with a desire to apply the highly efficient Path Integral Langevin Equation (PILE) thermostat to the Path Integral Ground State (PIGS) problem, a new hybrid PILE-PIGS, or LE-PIGS, method was developed. This thesis describes the theoretical justification for this method, including the introduction of a modified normal mode representation based on the Discrete Cosine Transform (DCT). It is shown that in DCT space, the equations of motion of a PIGS system are virtually identical to the equations of motion of a PIMD system in Fourier space. This leads to direct reuse of existing PILE code in MMTK, and options to extend this ground state problem to OpenMM for the purpose of GPU acceleration. The method is applied to a series of model systems, and in each case convergence to the exact ground state energy is observed.