Tempering optimistic bias in temporal predictions: The role of psychological distance in the unpacking effect 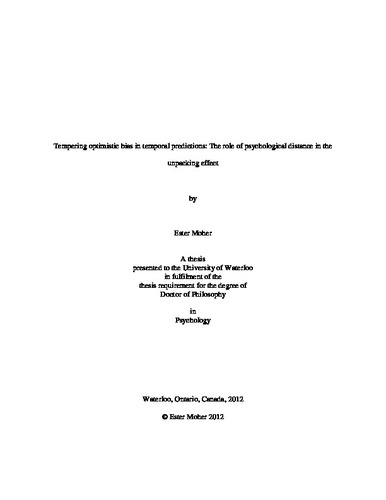 People typically underestimate the time it will take them to complete tasks, even when they are familiar with the process of executing those tasks (the “planning fallacy”; Kahneman & Tversky, 1979; Buehler, Griffin & Ross, 1994). One reason that individuals may show a chronic misprediction of task completion time hinges on an incomplete conception of the steps required for task completion. Support Theory (Tversky & Koehler, 1994) suggests that “unpacking” such steps may help to attenuate the planning fallacy. Indeed, when a task is unpacked into procedural steps, people give longer task completion time estimates, and the planning fallacy is minimized (Kruger & Evans, 2004). Construal level theory (Liberman & Trope, 1998) suggests that a lower-level construal of a task (i.e., a task construed in the near-future) may also foster less optimistic predictions, akin to the underlying mechanism of unpacking a task. It is hypothesized that the effects of unpacking on task completion time will be more pronounced for near-future tasks, because the lower-level construal of such tasks emphasizes details of component steps, making them more readily available to be “unpacked” as part of the prediction process. Conversely, for distant-future events, unpacking effects should be attenuated. Further, these distance-dependent unpacking effects should depend critically on the content of steps unpacked. These hypotheses were tested in five studies. Unpacking effects on completion time estimates are attenuated for distant- relative to near-future tasks, and that this attenuation emerges as a result of an abstract conception of the steps of the task when considered in the distant future.