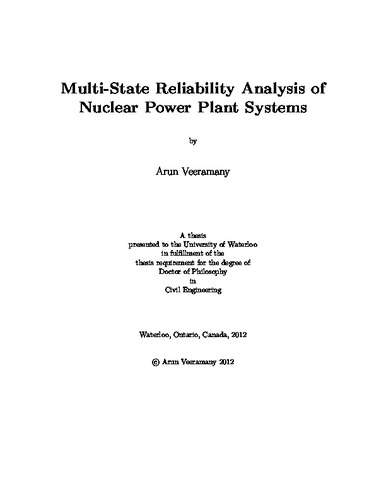 The probabilistic safety assessment of engineering systems involving high-consequence low-probability events is stochastic in nature due to uncertainties inherent in time to an event. The event could be a failure, repair, maintenance or degradation associated with system ageing. Accurate reliability prediction accounting for these uncertainties is a precursor to considerably good risk assessment model. Stochastic Markov reliability models have been constructed to quantify basic events in a static fault tree analysis as part of the safety assessment process. The models assume that a system transits through various states and that the time spent in a state is statistically random. The system failure probability estimates of these models assuming constant transition rate are extensively utilized in the industry to obtain failure frequency of catastrophic events. An example is core damage frequency in a nuclear power plant where the initiating event is loss of cooling system. However, the assumption of constant state transition rates for analysis of safety critical systems is debatable due to the fact that these rates do not properly account for variability in the time to an event. An ill-consequence of such an assumption is conservative reliability prediction leading to addition of unnecessary redundancies in modified versions of prototype designs, excess spare inventory and an expensive maintenance policy with shorter maintenance intervals. The reason for this discrepancy is that a constant transition rate is always associated with an exponential distribution for the time spent in a state. The subject matter of this thesis is to develop sophisticated mathematical models to improve predictive capabilities that accurately represent reliability of an engineering system. The generalization of the Markov process called the semi-Markov process is a well known stochastic process, yet it is not well explored in the reliability analysis of nuclear power plant systems. The continuous-time, discrete-state semi-Markov process model is a stochastic process model that describes the state transitions through a system of integral equations which can be solved using the trapezoidal rule. The primary objective is to determine the probability of being in each state. This process model ensures that time spent in the states can be represented by a suitable non-exponential distribution thus capturing the variability in the time to event. When exponential distribution is assumed for all the state transitions, the model reduces to the standard Markov model. This thesis illustrates the proposed concepts using basic examples and then develops advanced case studies for nuclear cooling systems, piping systems, digital instrumentation and control (I&C) systems, fire modelling and system maintenance. The first case study on nuclear component cooling water system (NCCW) shows that the proposed technique can be used to solve a fault tree involving redundant repairable components to yield initiating event probability quantifying the loss of cooling system. The time-to-failure of the pump train is assumed to be a Weibull distribution and the resulting system failure probability is validated using a Monte Carlo simulation of the corresponding reliability block diagram. Nuclear piping systems develop flaws, leaks and ruptures due to various underlying damage mechanisms. This thesis presents a general model for evaluating rupture frequencies of such repairable piping systems. The proposed model is able to incorporate the effect of aging related degradation of piping systems. Time dependent rupture frequencies are computed and the influence of inspection intervals on the piping rupture probability is investigated. There is an increasing interest worldwide in the installation of digital instrumentation and control systems in nuclear power plants. The main feedwater valve (MFV) controller system is used for regulating the water level in a steam generator. An existing Markov model in the literature is extended to a semi-Markov model to accurately predict the controller system reliability. The proposed model considers variability in the time to output from the computer to the controller with intrinsic software and mechanical failures. State-of-the-art time-to-flashover fire models used in the nuclear industry are either based on conservative analytical equations or computationally intensive simulation models. The proposed semi-Markov based case study describes an innovative fire growth model that allows prediction of fire development and containment including time to flashover. The model considers variability in time when transiting from one stage of the fire to the other. The proposed model is a reusable framework that can be of importance to product design engineers and fire safety regulators. Operational unavailability is at risk of being over-estimated because of assuming a constant degradation rate in a slowly ageing system. In the last case study, it is justified that variability in time to degradation has a remarkable effect on the choice of an effective maintenance policy. The proposed model is able to accurately predict the optimal maintenance interval assuming a non-exponential time to degradation. Further, the model reduces to a binary state Markov model equivalent to a classic probabilistic risk assessment model if the degradation and maintenance states are eliminated. In summary, variability in time to an event is not properly captured in existing Markov type reliability models though they are stochastic and account for uncertainties. The proposed semi-Markov process models are easy to implement, faster than intensive simulations and accurately model the reliability of engineering systems.