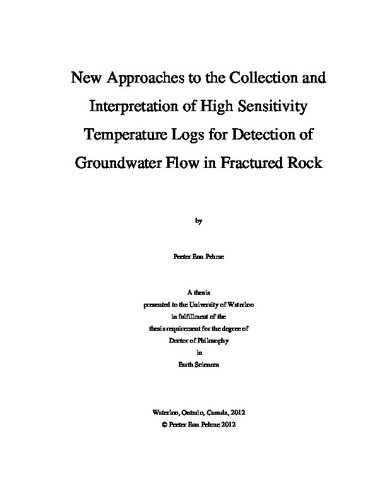 The use of temperature logging for identifying water flow through fractures in sedimentary rock has declined since the 1960’s and 70’s primarily because of low sensor resolution and cross-connected flow along the borehole. Although sensor resolution has improved to the order of 10-3 C for several decades, temperature logging has not experienced a notable increase in popularity. This thesis studies these and other fundamental limitations to the application of borehole temperature logging for identifying flow through fractured rock, and tests the hypothesis that the limitations can be overcome, presents new methods for accomplishing that goal, and increases the applicability of the technology. Although some conventional open-hole testing (e.g. flow meters) rely on vertical cross-connected flow in the borehole annulus to identify transmissive fractures, the flow is recognized to both distort open-hole temperature logs and facilitate chemical cross contamination. Removable polyurethane coated nylon liners have recently been developed to seal boreholes and minimize cross-contamination. High sensitivity temperature logs collected in the stagnant water column of lined boreholes under different hydrogeologic conditions herein show the degree to which cross connected flow can mask important flow conduits and thereby distort the interpretation of which fractures control flow. Results from the lined holes consistently lead to identification of more hydraulically active fractures than the open-hole profiles and an improved qualitative ranking of their relative importance to flow consistent with contaminant distributions observed in rock core. The identification of flow in fractures with temperature logs depends on the presence of a temperature contrast between the water and the rock matrix to create an aberration in the otherwise gradually varying profile. Atmospherically driven thermal disequilibrium commonly only extends several tens of meters from surface and dissipates with depth, making temperatures logs a variable assessment of flow that is depth limited to the heterothermic zone. The active line source (ALS) method, a series of temperature logs measured before and within a day after the water column of a lined borehole is placed into thermal disequilibrium with the broader rock mass with a heating cable, is shown to provide two advantages. First, the method eliminates the depth limitation allowing flow zones to be identified below the hetro-homothermic boundary and second, the qualitative assessment of ambient water flow in fractures is improved throughout the test interval. The identification of the flow conduits is supported by the combined evidence from visual inspection of core, rock contamination profiles, acoustic televiewer logs and tests for hydraulic conductivity using straddle packers. A new device, the thermal vector probe (TVP) is presented. It measures the temperature of the borehole fluid with four high sensitivity temperature sensors arranged in a tetrahedral pattern which is orientated using three directional magnetometers. Based on these, the total thermal gradient, its horizontal and vertical components as well as the direction and inclination are determined, typically at less than 0.01m intervals. Comparison of TVP data collected in lined boreholes under ambient conditions (thermal and hydraulic) as well during thermal recovery after ALS heating demonstrate the reproducibility of the results and superior characterization of thermal aberrations indicative of flow relative to single sensor temperature data. A detailed comparison of subdivisions in the thermal field to the vertical changes in the hydraulic gradient measured from three nearby high detail (12-14 port) multi-level installations demonstrates the interrelationship between hydraulic and thermal fields and thereby the potential benefit of the TVP in hydrogeologic investigations. Developing confidence in the use of both the TVP and ALS techniques in lined holes relies on demonstrating the reproducibility of results, consistency with observations from other technologies, and numerical simulation. Comparisons of field data with highly detailed numerical simulations using the program SMOKER shows that the influence of water flow in a fracture around a lined borehole on the temperature patterns is complex and factors such as convection likely influence the shape of the thermal aberrations observed. Model results suggest that the temperature aberrations are related to the volumetric water flow, a distinct lower resolution limit exists (approximately 5.6x10-7 m3/sec per metre across the fracture, m2/s), and although flow above 10-4 m2/s is readily detectable, prospects for quantification of higher flows are poor. Some field data indicate the numerically determined lower limit is conservative and the details of the limit require additional study. The aspects of temperature logging historically limiting applicability for detecting and comparing flow through discrete or groups of fractures in rock are hereby better understood and consistently overcome. The high level of detail achieved in the data highlights the complexity of the system and offers opportunities for further refinement. The TVP and ALS technique applied in a lined borehole promise both new insights into, and potential for quantification of ambient groundwater flow through fractures in rock.