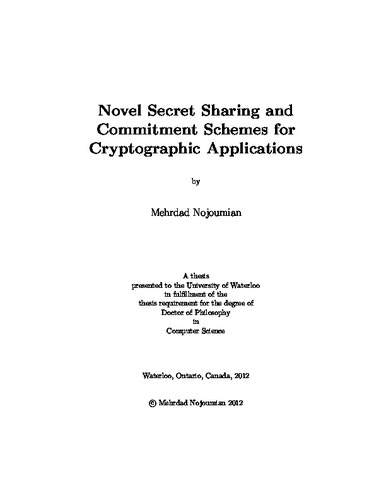 In the second chapter, the notion of a social secret sharing (SSS) scheme is introduced in which shares are allocated based on a player's reputation and the way she interacts with other parties. In other words, this scheme renews shares at each cycle without changing the secret, and it allows the trusted parties to gain more authority. Our motivation is that, in real-world applications, components of a secure scheme have different levels of importance (i.e., the number of shares a player has) and reputation (i.e., cooperation with other parties). Therefore, a good construction should balance these two factors accordingly. In the third chapter, a novel socio-rational secret sharing (SRS) scheme is introduced in which rational foresighted players have long-term interactions in a social context, i.e., players run secret sharing while founding and sustaining a public trust network. To motivate this, consider a repeated secret sharing game such as sealed-bid auctions. If we assume each party has a reputation value, we can then penalize (or reward) the players who are selfish (or unselfish) from game to game. This social reinforcement stimulates the players to be cooperative in the secret recovery phase. Unlike the existing protocols in the literature, the proposed solution is stable and it only has a single reconstruction round. In the fourth chapter, a comprehensive analysis of the existing dynamic secret sharing (DSS) schemes is first provided. In a threshold scheme, the sensitivity of the secret and the number of players may fluctuate due to various reasons. Moreover, a common problem with almost all secret sharing schemes is that they are ``one-time'', meaning that the secret and shares are known to everyone after secret recovery. We therefore provide new techniques where the threshold and/or the secret can be changed multiple times to arbitrary values after the initialization. In addition, we introduce a new application of dynamic threshold schemes, named sequential secret sharing (SQS), in which several secrets with increasing thresholds are shared among the players who have different levels of authority. In the fifth chapter, a cryptographic primitive, named multicomponent commitment scheme (MCS) is proposed where we have multiple committers and verifiers. This new scheme is used to construct different sealed-bid auction protocols (SAP) where the auction outcomes are defined without revealing the losing bids. The main reason for constructing secure auctions is the fact that the values of the losing bids can be exploited in future auctions and negotiations if they are not kept private. In our auctioneer-free protocols, bidders first commit to their bids before the auction starts. They then apply a decreasing price mechanism to define the winner and selling price in an unconditionally secure setting.