In The Fields: the Fun Palace, Co-creation, and the Digital City 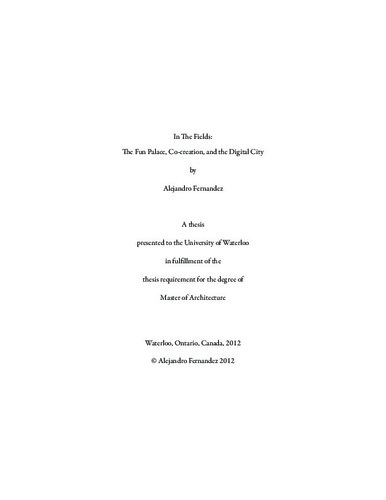 In 1963, architect Cedric Price, theatre producer Joan Littlewood, and cybernetician Gordon Pask proposed a new kind of leisure centre called the Fun Palace. Though never built, the project continues to influence architecture and is the inspiration for this thesis. Known also as the “Laboratory of Fun,” the Fun Palace developed a compelling yet problematic narrative: people would have the freedom to design their own spatial experiences, but their behaviours would be monitored and probed. Innovations from the cybernetic committee had propelled the Fun Palace beyond mundane reality and into the virtual. In fact, the Fun Palace was more than a building; it was an information interface where architecture and humans were connected by cybernetic feedback. Of particular importance to this thesis is the way the Fun Palace antici- pated how digital technology would transform the world, and how it can be understood as an early prototype of the digital city. The model of space that the Fun Palace proposed shifted our understanding of architecture from autonomous and static to complex and dynamic; from an architecture of walls to an architecture of fields. This thesis is organized along three lines of inquiry. Firstly, that architecture is participatory. Secondly, that architecture is multidimensional. Thirdly, that architecture is generated by real-time transactions. The thesis concludes with a speculation called In The Fields: a mobile laboratory for co-creation in the digital city.