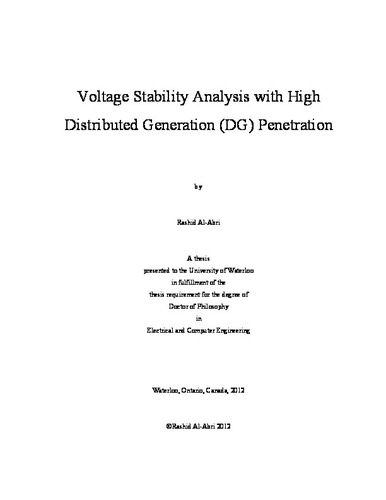 Interest in Distributed Generation (DG) in power system networks has been growing rapidly. This increase can be explained by factors such as environmental concerns, the restructuring of electricity businesses, and the development of technologies for small-scale power generation. DG units are typically connected so as to work in parallel with the utility grid; however, with the increased penetration level of these units and the advancements in unit’s control techniques, there is a great possibility for these units to be operated in an autonomous mode known as a microgrid. Integrating DG units into distribution systems can have an impact on different practices such as voltage profile, power flow, power quality, stability, reliability, and protection. The impact of the DG units on stability problem can be further classified into three issues: voltage stability, angle stability, and frequency stability. As both angle and frequency stability are not often seen in distribution systems, voltage stability is considered to be the most significant in such systems. In fact, the distribution system in its typical design doesn’t suffer from any stability problems, given that all its active and reactive supplies are guaranteed through the substation. However, the following facts alter this situation: • With the development of economy, load demands in distribution networks are sharply increasing. Hence, the distribution networks are operating more close to the voltage instability boundaries. • The integration of distributed generation in distribution system introduces possibility of encountering some active/reactive power mismatches resulting in some stability concerns at the distribution level. Motivated by these facts, the target of this thesis is to investigate, analyze and enhance the voltage stability of distribution systems with high penetration of distributed generation. This study is important for the utilities because it can be applied with Connection Impact Assessment (CIA ). The study can be added as a complement assessment to study the impacts of the installation of DG units on voltage stability. In order to accomplish this target, this study is divided into three perspectives: 1) utilize the DG units to improve the voltage stability margin and propose a method to allocate DG units for this purpose, 2) investigate the impact of the DG units on proximity to voltage stability 3) conduct harmonic resonance analysis to visualize the impacts of both parallel and series resonance on the system’s stability. These perspectives will be tackled in Chapter 3, Chapter 4, and Chapter 5, respectively. Chapter 3 tackles placing and sizing of the DG units to improve the voltage stability margin and consider the probabilistic nature of both the renewable energy resources and the load. In fact, placement and sizing of DG units with an objective of improving the voltage stability margin while considering renewable DG generation and load probability might be a complicated problem, due to the complexity of running continuous load flow and at the same time considering the probabilistic nature of the load and the DG unit’s resources. Therefore, this thesis proposes a modified voltage index method to place and size the DG units to improve the voltage stability margin, with conditions of both not exceeding the buses’ voltage, and staying within the feeder current limits. The probability of the load and DG units are modeled and included in the formulation of the sizing and placing of the DG units. Chapter 4 presents a model and analysis to study the impact of the DG units on proximity to voltage instability. Most of the modern DG units are equipped with power electronic converters at their terminals. The power electronic converter plays a vital role to match the characteristics of the DG units with the requirements of the grid connections, such as frequency, voltage, control of active and reactive power, and harmonic minimization. Due to the power electronics interfacing, these DG units have negligible inertia. Thus, they make the system potentially prone to oscillations resulting from the network disturbances. The main goal of this chapter is to model and analyze the impact of distributed generation DG units on the proximity of voltage instability, with high penetration level of DG units. Chapter 5 studies the harmonic resonance due to the integration of DG units in distribution systems. Normally, the harmonic resonance phenomenon is classified as a power quality problem, however, this phenomenon can affect the stability of the system due to the parallel and series resonance. Thus, the main goal of this chapter is to study and analyze the impact of the integration of distributed generation on harmonic resonance by modeling different types of DG units and applying impedance frequency scan method.