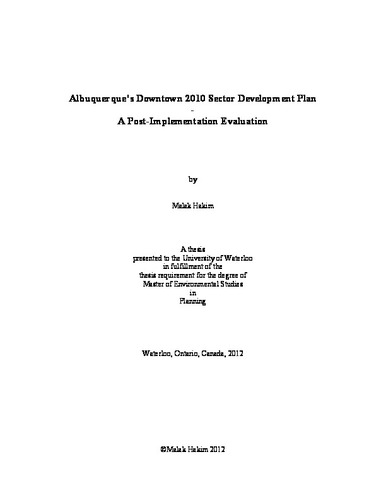 This thesis was a post-implementation evaluation of Albuquerque’s Downtown 2010 Sector Development Plan. The Downtown Plan, commissioned in 2000, has a preset deadline of 2010 for meeting conditions outlined within its text. Therefore, the timing of this study was optimal. A triangulated, mixed methods methodology yielded data that were evaluated through an amalgamation of conformance and performance-based evaluation approaches. Six of the twelve categories, under which the Plan’s text is organized, were chosen as the focus of this study’s evaluation efforts. The categories are as follows: 1) Transportation and Parking; 2) Land Use and Design; 3) Healthy Neighborhoods; 4) Urban Housing; 5) Urban Retailing; and 6) Parks and Open Space. The findings of this study were specified to each of the six categories with additional findings listed later on. Overall, the results for each category fell between ‘somewhat unsuccessful’ to ‘successful’ based on a success spectrum created for typifying the evaluation results. Ultimately, this study found that the Plan was responsible for some significant and positive changes that occurred in Downtown Albuquerque over the past decade. These include the development of a number of various housing options, the prevention of commercial encroachment from the Downtown onto adjacent neighborhoods, and the creation of parking, bicycle, transit, and pedestrian facilities. A lack of various retail services and the failure to remediate the Fourth Street Mall are couple of the 2010 Plan implementation failures discovered by the evaluation. Additional findings spoke to the interplay between categories such as Urban Housing and Urban Retailing, which identified the need to synchronize the functions of these two interdependent markets. Further discoveries were derived from the collected data and their subsequent analysis.