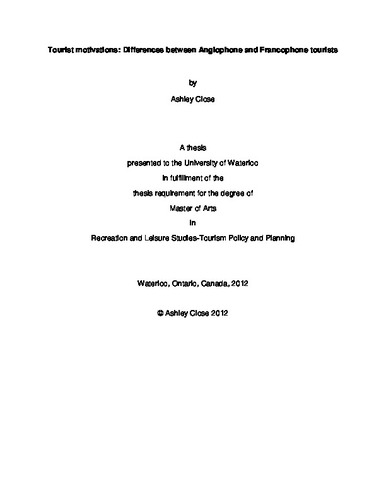 Culture has been demonstrated in the literature to have an effect on tourism behavior, including the way that tourists perceive their travel experience; different cultures often hold different values (LeBlanc, 2004 & Sussman and Rashcovsky, 1997). Thus, understanding visitors’ values in comparison to those of the host destination may alter how tourism businesses should relate to tourists, how a tourist may perceive their experience, as well as a tourist’s motivation to travel to a destination (Devesa, Laguna & Palacios, 2010). The combination of heritage and tourism, specifically the UNESCO world heritage site designation, has had a significant impact on tourist motivation as well through the prestige that the designation presents (Parks Canada, 2009). Current research lacks a focus on the individual in relation to the UNESCO world heritage site designation (Marcotte & Bourdeau, 2006). There is also a lack of research with a Canadian focus as well as comparisons amongst cultures (Kay, 2009). Although there has been some focus on Canada, the demographics have been skewed toward English speaking individuals; a lack of demographic information and data concerning native tongue has been collected (Gibson, McKelvie & DE MAN, 2008). The current study will take a Canadian focus by situating the research within Canada, specifically the UNESCO world heritage site of Quebec City, and compare the Anglophone and Francophone cultures. Anglophone and Francophone tourists are defined in this study as “people whose mother tongue is French (Francophone) or English (Anglophones)” (Gibson et al., 2008, p. 137). This study uses a questionnaire; which combines the questionnaires found in Lee, Lee and Wicks (2004) and Kozak (2001), in order to collect data on tourist travel motivations and satisfaction. The survey was conducted during October 2011, and involved the researcher travelling to different tourist sites, such as the Citadel and Le Musee de la Civilisation. The final data set consisted of 375 cases, and an effective response rate of 443. The objectives of this study were: 1.To examine the motivational differences between Canadian Anglophone and Francophone visitors. 2.To examine whether there are cultural differences in the travel needs of Francophone and Anglophone travelers.3.To examine whether tourism sites and businesses in Quebec City are meeting the needs and desires of tourists. To accomplish these objectives, the following research questions were asked: 1. Why do people visit heritage sites? Specifically, what motivates people to visit heritage sites? 2. Do Canadian Anglophone and Francophone cultures have different motivations for travelling? Sub-questions could include: in general, do different cultures have different motivations for travelling? For example, tourists may aim to connecting with their ancestral roots and culture. 3. Are Anglophone and Francophone tourists satisfied by their travel experience to Quebec City? In particular, are there differences in satisfaction levels between Anglophone and Francophone tourists? The computer program SPSS (version 19) was used to conduct statistical tests on, and interpret, the data that was collected. Independent samples t-tests, one-way ANOVAs,Two-way ANOVAs and frequencies, modes and medians were performed in order to reach the research objectives and answer the research questions. This study provides insight into the travel motivations and satisfaction levels of Anglophone, Francophone, and bilingual visitors to Quebec City. The main implications of this study concern marketing, interpretation of sites, and service provision. The findings of this study present conflicting results surrounding the influence of family and culture on travel motivations of tourists. However, the findings of this study suggest that gender has a strong influence on tourist motivation, and marketing efforts should be targeting females as they were more significantly affected by the motivations examined in this study. There are also implications related to interpretation as there were significant differences found between Anglophone and Francophone participants on the motivation factor ‘cultural exploration experiences offered’. Finally there are implications surrounding service provision as the findings suggest that activities may be more geared towards the Anglophone travelers. This study will expand on these implications further.