A Targeting Approach To Disturbance Rejection In Multi-Agent Systems 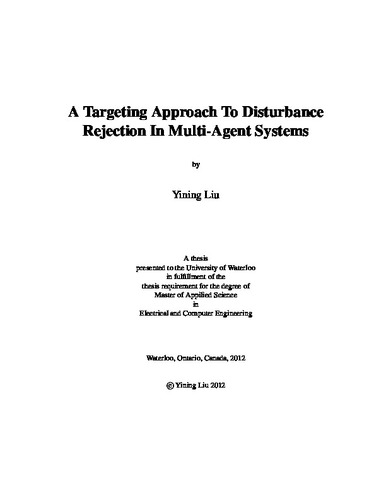 This thesis focuses on deadbeat disturbance rejection for discrete-time linear multi-agent systems. The multi-agent systems, on which Spieser and Shams’ decentralized deadbeat output regulation problem is based, are extended by including disturbance agents. Specifically, we assume that there are one or more disturbance agents interacting with the plant agents in some known manner. The disturbance signals are assumed to be unmeasured and, for simplicity, constant. Control agents are introduced to interact with the plant agents, and each control agent is assigned a target plant agent. The goal is to drive the outputs of all plant agents to zero in finite time, despite the presence of the disturbances. In the decentralized deadbeat output regulation problem, two analysis schemes were introduced: targeting analysis, which is used to determine whether or not control laws can be found to regulate, not all the agents, but only the target agents; and growing analysis, which is used to determine the behaviour of all the non-target agents when the control laws are applied. In this thesis these two analyses are adopted to the deadbeat disturbance rejection problem. A new necessary condition for successful disturbance rejection is derived, namely that a control agent must be connected to the same plant agent to which a disturbance agent is connected. This result puts a bound on the minimum number of control agents and constraints the locations of control agents. Then, given the premise that both targeting and growing analyses succeed in the special case where the disturbances are all ignored, a new control approach is proposed for the linear case based on the idea of integral control and the regulation methods of Spieser and Shams. Preliminary studies show that this approach is also suitable for some nonlinear systems.