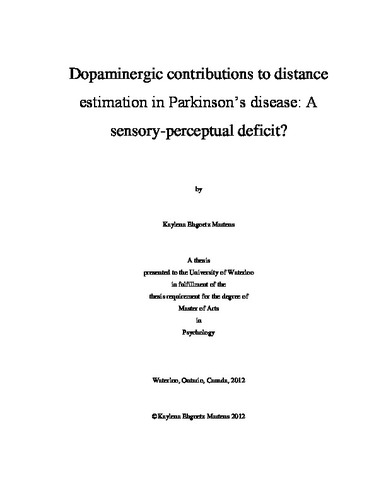 Recent research has found that perceptual deficits exist in Parkinson’s disease (PD), yet the link between perception and movement impairments is not well understood. Inaccurate estimation of distance has the potential to be an underlying cause of movement impairments. Alternatively, those with PD may not be able to perceive their own movements accurately. The main objective of this thesis was to evaluate (1) whether distance estimation is influenced by static perception compared to perception during movement in PD, (2) how visual motion processing contributes to distance estimation during movement, and (3) how dopaminergic medication contributes to these distance estimation deficits. Thirty-seven participants (19 individuals with PD, 18 age-matched healthy control participants (HC) estimated distance to a remembered target in a total of 48 trials, in 4 randomized blocks. Estimation conditions included: (i) no motion: participants pointed with a laser, (ii) motion: participants walked to the estimated position, (iii) visual motion (wheelchair): participants were pushed in a wheelchair while they gave their estimate, (iv) visual motion (VR): participants completed their distance estimate while seated and viewed themselves (as if they were walking) in VR. PD patients completed this protocol twice; once OFF and once ON dopaminergic medication. Participants were matched for age, distance acuity, Modified Mini Mental State Exam (3MS), spatial working memory and motor planning ability. In Study 1 (no motion vs. motion), individuals with PD and healthy control participants did not differ in judgment accuracy during the no motion condition. However, those with PD did have greater amounts of error compared to healthy control participants while estimating distance during the motion condition. Similarly, those with PD significantly underestimated the target position compared to healthy control participants during the motion condition only. Individuals with PD demonstrated greater variability overall. In Study 2, error did not differ between PD and HC groups during visual motion perception (wheelchair). Interestingly, the HC group tended to perform significantly worse than those with PD in the VR condition. Overall, across both studies there was no significant influence of dopaminergic medication in any of the conditions. Individuals with PD demonstrated distance estimation deficits only when required to move through their environment. In contrast to estimations made with movement, neither static estimation nor estimations made with visual motion revealed significant differences between the two groups. Thus perceptual estimation deficits appear to occur only during movement, which may be suggestive of an underlying sensory processing deficit which leads to a problem integrating vision and self-motion information.