When Should We Disagree? The Effect of Conflict on Team Identity in North American and East Asian Teams 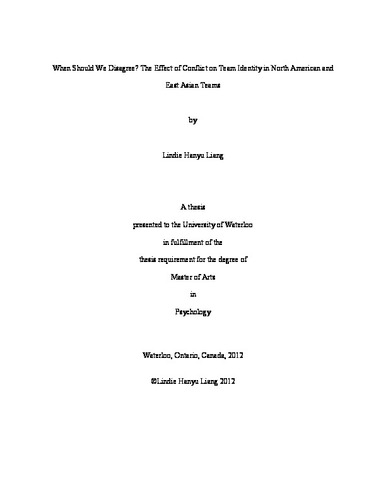 Prior literature on conflict in teams has generally established that team heterogeneity (vs. homogeneity) influences the extent to which conflict occurs in teams. However, to date literature has not examined different types of culturally homogeneous teams’ experience of team conflict and its effect on team identity. In two field studies, I look at the effect of team cultural composition and conflict on team identity (Study 1) and the effect of team cultural composition on the tendency to engage in conflict over time (Study 2). Consistent with the literature on culture and dialectical reasoning that suggests East Asians are better able to tolerate contradictions and mixed emotions which usually accompany conflict situations, my results revealed that conflict did not affect East Asian teams’ identity, but it negatively impacted North American teams’ identity. Further, my results revealed that North American teams reported higher levels of conflict during the initial team interaction, but East Asian teams reported higher levels of conflict during later team interactions. I discuss contributions to theory on team conflict and identity and implications for managing culturally homogeneous North American and East Asian teams.

Lindie Hanyu Liang (2012). When Should We Disagree? The Effect of Conflict on Team Identity in North American and East Asian Teams. UWSpace. http://hdl.handle.net/10012/6834