Resource Management and Pricing in Networks 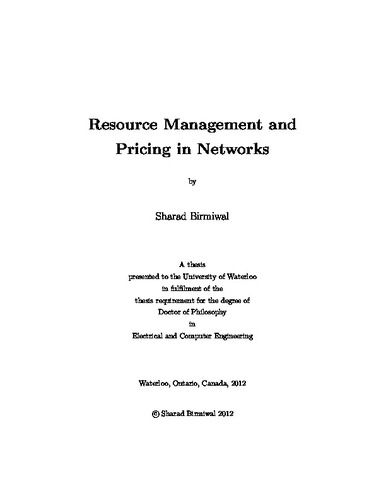 Resource management is important for network design and deployment. Resource management and allocation have been studied under a wide variety of scenarios --- routing in wired networks, scheduling in cellular networks, multiplexing, switching, and channel access in opportunistic networks are but a few examples. In this dissertation, we revisit resource management in the context of routing and scheduling in multihop wireless networks and pricing in single resource systems. The first issue addressed is of delays in multihop wireless networks. The resource under contention is capacity which is allocated by a joint routing and scheduling algorithm. Delay in wireless networks is a key issue gaining interest with the growth of interactive applications and proliferation of wireless networks. We start with an investigation of the back-pressure algorithm (BPA), an algorithm that activates the schedule with the largest sum of link weights in a timeslot. Though the BPA is throughput-optimal, it has poor end-to-end delays. Our investigation identifies poor routing decisions at low loads as one cause for it. We improve the delay performance of max-weight algorithms by proposing a general framework for routing and scheduling algorithms that allow directing packets towards the sink node dynamically. For a stationary environment, we explicitly formulate delay minimization as a static problem while maintaining stability. We see similar improved delay performance with the advantage of reduced per time-slot complexity. Next, the issue of pricing for flow based models is studied. The increasing popularity of cloud computing and the ease of commerce over the Internet is making pricing a key issue requiring greater attention. Although pricing has been extensively studied in the context of maximizing revenue and fairness, we take a different perspective and investigate pricing with predictability. Prior work has studied resource allocations that link insensitivity and predictability. In this dissertation, we present a detailed analysis of pricing under insensitive allocations. We study three common pricing models --- fixed rate pricing, Vickrey-Clarke-Groves (VCG) auctions, and congestion-based pricing, and provide the expected operator revenue and user payments under them. A pre-payment scheme is also proposed where users pay on arrival a fee for their estimated service costs. Such a mechanism is shown to have lower variability in payments under fixed rate pricing and VCG auctions while generating the same long-term revenue as in a post-payment scheme, where users pay the exact charge accrued during their sojourn. Our formulation and techniques further the understanding of pricing mechanisms and decision-making for the operator.