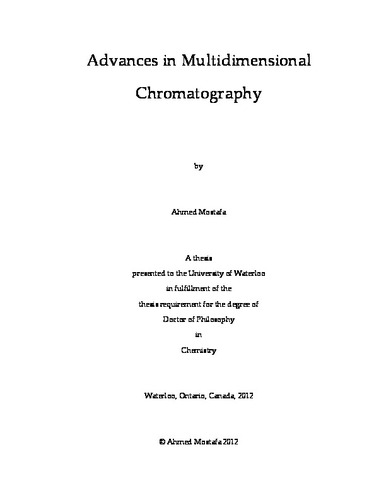 Comprehensive two-dimensional gas chromatography (GC×GC) is among the most powerful methods used to separate complex samples. Two columns of different selectivities are coupled in series through a special interface (modulator). The main role of the modulator is to trap and/or sample the primary column effluent and inject it into the secondary column. This results in an enhanced sensitivity, increased peak capacity and structured chromatograms. Practically all thermal modulators in use today are equipped with two trapping stages to prevent problems related to analyte breakthrough, which makes their design more complicated. In this work, The sensitivity of GC×GC coupled to two different detectors, time-of-flight mass spectrometer (GC×GC-TOFMS) and flame ionization detector (GC×GC-FID) was compared to the sensitivity of conventional one-dimensional gas chromatography (GC-TOFMS and GC-FID) by determining the limits of detection (LOD) for a series of different compounds such as n-alkanes and alcohols using both approaches. Different modulation periods were used for GC×GC ranging from 2 to 8 seconds. In addition, different types of inlet ferrules were used to study their effect on both systems. In general, the LODs in GC×GC were lower by at least an order of magnitude. A new liquid nitrogen-based single-stage cryogenic modulator was developed and characterized. In addition, a new liquid nitrogen delivery system was developed. Band breakthrough was prevented using changes in the carrier gas viscosity with temperature to reduce the carrier gas flow during desorption. Injection band widths for n-alkanes of 30-40 ms at half height were obtained. Most importantly, even the solvent peak could be perfectly modulated, which is impossible with any commercially available thermal modulator. Moreover, the newly developed liquid nitrogen supply system reduced liquid nitrogen consumption to ~30 L per day versus 50-100 L per day for commercially available modulators. Evaluation of the newly developed system for the GC×GC separation of some real samples such as regular gasoline and diesel fuel showed that the analytical performance of this single-stage modulator rivals that of the more complicated dual-stage designs. The technique was tested in various applications. Headspace solid phase microextraction in combination with GC×GC coupled to time-of-flight mass spectrometry (HS-SPME-GC×GC-TOFMS) were used for the detailed investigation of the impact of malolactic fermentation (MLF) using three commercial Oenococcus oeni strains on the volatile composition of Pinotage wines. The technique was also applied for the characterization of Pinotage wine volatiles and blue honeysuckle berries volatiles.