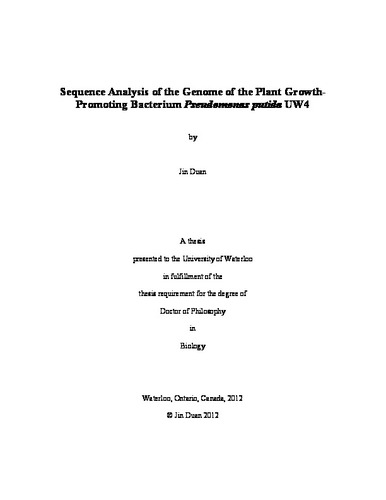 The plant growth-promoting bacterium (PGPB) Pseudomonas putida UW4, previously isolated from the rhizosphere of common reeds growing on the campus of University of Waterloo, promotes plant growth in the presence of different environmental stresses, such as flooding, high concentration of salt, cold, heavy metals, drought and phytopathogens. The known mechanisms used by P. putida UW4 to promote plant growth include 1-aminocyclopropane-1-carboxylate (ACC) deaminase, indole-3-acetic acid (IAA) synthesis and siderophore production. In this work, the genome sequence of UW4 was obtained by pyrosequencing and the gaps between the contigs were closed by directed PCR. The P. putida UW4 genome contains a single circular chromosome that is 6,183,388 bp with a 60.05% G+C content. The bacterial genome contains 5,431 predicted protein-coding sequences that occupy 87.4% of the genome. Nineteen genomic islands were predicted and thirty one complete putative insertion sequences were identified. Genome analyses were conducted in order to better characterize the general features of the UW4 genome. Genes potentially involved in plant growth promotion such as IAA biosynthesis, trehalose production, siderophore production, and acetoin synthesis were identified, which will facilitate a better understanding of the mechanisms of plant-microbe interactions. Moreover, genes that contribute to the environmental fitness of UW4 were also determined including genes responsible for heavy metal resistance such as nickel, copper, cadmium, zinc, molybdate, cobalt, arsenate, and chromate. Central metabolic pathways helped elucidate the physiological roles of diverse metabolites of UW4. Unexpectedly, whole-genome comparison with other completely sequenced Pseudomonas sp. revealed that UW4 is more similar to the fluorescens group rather than to the putida group. More surprisingly, a putative type III secretion system (T3SS) was found in the UW4 genome, and T3SS was thought to be essential for bacterial pathogenesis. Although putative T3SS was observed in other non-pathogenic Pseudomonas spp. previously, this is the first report indicating that a T3SS in a Pseudomonas sp. is highly similar to the one from Salmonella spp.