Some Theory and Applications of Probability in Quantum Mechanics 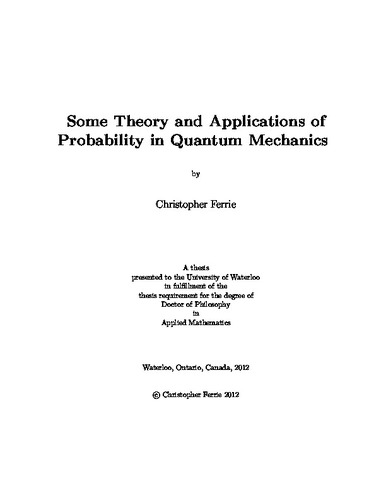 This thesis investigates three distinct facets of the theory of quantum information. The first two, quantum state estimation and quantum process estimation, are closely related and deal with the question of how to estimate the classical parameters in a quantum mechanical model. The third attempts to bring quantum theory as close as possible to classical theory through the formalism of quasi-probability. Building a large scale quantum information processor is a significant challenge. First, we require an accurate characterization of the dynamics experienced by the device to allow for the application of error correcting codes and other tools for implementing useful quantum algorithms. The necessary scaling of computational resources needed to characterize a quantum system as a function of the number of subsystems is by now a well studied problem (the scaling is generally exponential). However, irrespective of the computational resources necessary to just write-down a classical description of a quantum state, we can ask about the experimental resources necessary to obtain data (measurement complexity) and the computational resources necessary to generate such a characterization (estimation complexity). These problems are studied here and approached from two directions. The first problem we address is that of quantum state estimation. We apply high-level decision theoretic principles (applied in classical problems such as, for example, universal data compression) to the estimation of a qubit state. We prove that quantum states are more difficult to estimate than their classical counterparts by finding optimal estimation strategies. These strategies, requiring the solution to a difficult optimization problem, are difficult to implement in practise. Fortunately, we find estimation algorithms which come close to optimal but require far fewer resources to compute. Finally, we provide a classical analog of this quantum mechanical problem which reproduces, and gives intuitive explanations for, many of its features, such as why adaptive tomography can quadratically reduce its difficulty. The second method for practical characterization of quantum devices takes is applied to the problem of quantum process estimation. This differs from the above analysis in two ways: (1) we apply strong restrictions on knowledge of various estimation and control parameters (the former making the problem easier, the latter making it harder); and (2) we consider the problem of designing future experiments based on the outcomes of past experiments. We show in test cases that adaptive protocols can exponentially outperform their off-line counterparts. Moreover, we adapt machine learning algorithms to the problem which bring these experimental design methodologies to realm of experimental feasibility. In the final chapter we move away from estimation problems to show formally that a classical representation of quantum theory is not tenable. This intuitive conclusion is formally borne out through the connection to quasi-probability -- where it is equivalent to the necessity of negative probability in all such representations of quantum theory. In particular, we generalize previous no-go theorems to arbitrary classical representations of quantum systems of arbitrary dimension. We also discuss recent progress in the program to identify quantum resources for subtheories of quantum theory and operational restrictions motivated by quantum computation.

Christopher Ferrie (2012). Some Theory and Applications of Probability in Quantum Mechanics. UWSpace. http://hdl.handle.net/10012/6822