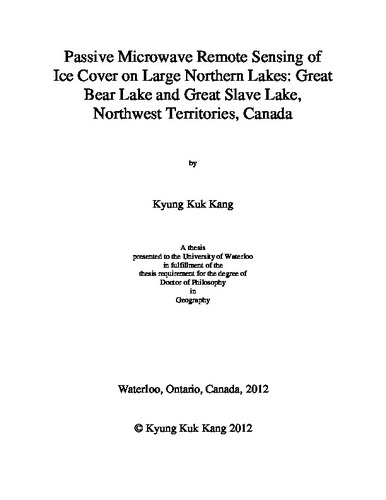 Time series of brightness temperature (TB) measurement obtained at various frequencies by the Advanced Microwave Scanning Radiometer–Earth Observing System (AMSR-E) are investigated to determine ice phenology parameters and ice thickness on Great Bear Lake (GBL) and Great Slave Lake (GSL), Northwest Territories, Canada. TB measurements from the 6.9, 10.7, 18.7, 23.8, 36.5, and 89.0 GHz channels (H- and V- polarization) are compared to assess their potential for detecting freeze-onset (FO)/melt-onset (MO), ice-on/ice-off dates, and ice thickness on both lakes. The sensitivity of TB measurements at 6.9, 10.7, and 18.7 GHz to ice thickness is also examined using a previously validated thermodynamic lake ice model and the most recent version of the Helsinki University of Technology (HUT) model, which accounts for the presence of a lake-ice layer under snow. This study shows that 18.7 GHz H-pol is the most suitable AMSR-E channel for detecting ice phenology events, while 18.7 GHz V-pol is preferred for estimating lake ice thickness on the two large northern lakes. These two channels therefore form the basis of new ice cover retrieval algorithms. The algorithms were applied to map monthly ice thickness products and all ice phenology parameters on GBL and GSL over seven ice seasons (2002-2009). Through application of the algorithms much was learned about the spatio-temporal dynamics of ice formation, decay and growth rate/thickness on the two lakes. Key results reveal that: 1) both FO and ice-on dates occur on average 10 days earlier on GBL than on GSL; 2) the freeze-up process or freeze duration (FO to ice-on) takes a comparable amount of time on both lakes (two to three weeks); 3) MO and ice-off dates occur on average one week and approximately four weeks later, respectively, on GBL; 4) the break-up process or melt duration (MO to ice-off) lasts for an equivalent period of time on both lakes (six to eight weeks); 5) ice cover duration is about three to four weeks longer on GBL compared to its more southern counterpart (GSL); and 6) end-of-winter ice thickness (April) on GBL tends to be on average 5-15 cm thicker than on GSL, but with both spatial variations across lakes and differences between years.