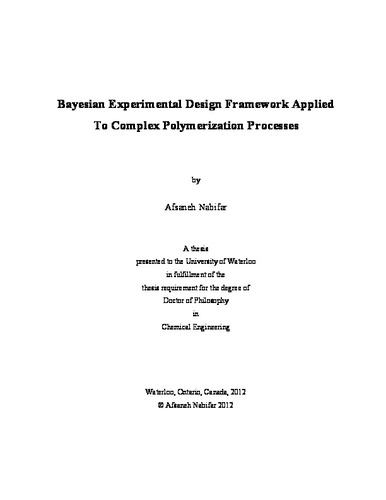 The Bayesian design approach is an experimental design technique which has the same objectives as standard experimental (full or fractional factorial) designs but with significant practical benefits over standard design methods. The most important advantage of the Bayesian design approach is that it incorporates prior knowledge about the process into the design to suggest a set of future experiments in an optimal, sequential and iterative fashion. Since for many complex polymerizations prior information is available, either in the form of experimental data or mathematical models, use of a Bayesian design methodology could be highly beneficial. Hence, exploiting this technique could hopefully lead to optimal performance in fewer trials, thus saving time and money. In this thesis, the basic steps and capabilities/benefits of the Bayesian design approach will be illustrated. To demonstrate the significant benefits of the Bayesian design approach and its superiority to the currently practised (standard) design of experiments, case studies drawn from representative complex polymerization processes, covering both batch and continuous processes, are presented. These include examples from nitroxide-mediated radical polymerization of styrene (bulk homopolymerization in the batch mode), continuous production of nitrile rubber in a train of CSTRs (emulsion copolymerization in the continuous mode), and cross-linking nitroxide-mediated radical copolymerization of styrene and divinyl benzene (bulk copolymerization in the batch mode, with cross-linking). All these case studies address important, yet practical, issues in not only the study of polymerization kinetics but also, in general, in process engineering and improvement. Since the Bayesian design technique is perfectly general, it can be potentially applied to other polymerization variants or any other chemical engineering process in general. Some of the advantages of the Bayesian methodology highlighted through its application to complex polymerization scenarios are: improvements with respect to information content retrieved from process data, relative ease in changing factor levels mid-way through the experimentation, flexibility with factor ranges, overall “cost”-effectiveness (time and effort/resources) with respect to the number of experiments, and flexibility with respect to source and quality of prior knowledge (screening experiments versus models and/or combinations). The most important novelty of the Bayesian approach is the simplicity and the natural way with which it follows the logic of the sequential model building paradigm, taking full advantage of the researcher’s expertise and information (knowledge about the process or product) prior to the design, and invoking enhanced information content measures (the Fisher Information matrix is maximized, which corresponds to minimizing the variances and reducing the 95% joint confidence regions, hence improving the precision of the parameter estimates). In addition, the Bayesian analysis is amenable to a series of statistical diagnostic tests that one can carry out in parallel. These diagnostic tests serve to quantify the relative importance of the parameters (intimately related to the significance of the estimated factor effects) and their interactions, as well as the quality of prior knowledge (in other words, the adequacy of the model or the expert’s opinions used to generate the prior information, as the case might be). In all the case studies described in this thesis, the general benefits of the Bayesian design were as described above. More specifically, with respect to the most complex of the examples, namely, the cross-linking nitroxide-mediated radical polymerization (NMRP) of styrene and divinyl benzene, the investigations after designing experiments through the Bayesian approach led to even more interesting detailed kinetic and polymer characterization studies, which cover the second part of this thesis. This detailed synthesis, characterization and modeling effort, trigged by the Bayesian approach, set out to investigate whether the cross-linked polymer network synthesized under controlled radical polymerization (CRP) conditions had a more homogeneous structure compared to the network produced by regular free radical polymerization (FRP). In preparation for the identification of network homogeneity indicators based on polymer properties, cross-linking kinetics of nitroxide-mediated radical polymerization of styrene (STY) in the presence of a small amount of divinyl benzene (DVB; as the cross-linker) and N-tert-butyl-N-(2-methyl)-1-phenylpropyl)-O-(1-phenylethyl) hydroxylamine (I-TIPNO; as the unimolecular initiator) was investigated in detail and the results were contrasted with regular FRP of STY/DVB and homopolymerization of STY in the presence of I-TIPNO, as reference systems. The effect of [DVB], [I-TIPNO] and [DVB]/ [I-TIPNO] were investigated on rate, molecular weights, gel content and swelling index. In parallel to our experimental investigations, a detailed mathematical model was developed and validated with the respective experimental data. Not only did model predictions follow the general experimental trends very well but also were in good agreement with experimental observations. Pursuing our investigations for a more reliable indicator for network homogeneity, corresponding branched and cross-linked polymers were characterized. Thermo-mechanical analysis was used as an attempt to investigate the difference between polymer networks synthesized through FRP and NMRP. Results from both Differential Scanning Calorimetry (DSC) and Dynamic Mechanical Analysis (DMA) showed that at the same cross-link density and conversion level, polymer networks produced by FRP and NMRP exhibit indeed comparable structures. Overall, it was notable that a wealth of process information was generated by such a practical experimental design technique, and with minimal experimental effort compared to previous (undesigned) efforts (and associated, often not well founded, claims) in the literature!