On the Perpetuation of Ignorance: System Dependence, System Justification, and the Motivated Avoidance of Socio-Political Information 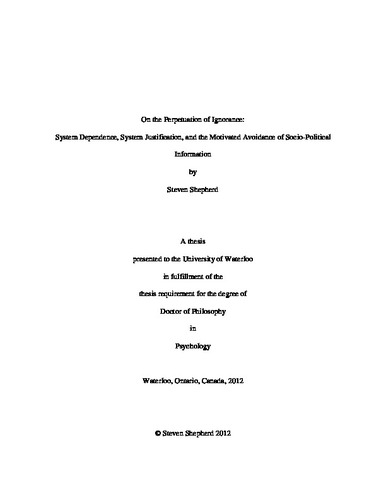 How do people cope when they feel uninformed or unable to understand important social issues, such as the environment, energy concerns, or the economy? One would intuitively expect that a lack of knowledge would motivate an increased, unbiased search for information, thereby facilitating participation and engagement in these issues – especially when they are consequential, pressing, and self-relevant. However, there appears to be a discrepancy between the importance/self-relevance of social issues and people’s willingness to engage with and learn about them. Drawing from the literature on System Justification Theory (Jost & Banaji, 1994), I hypothesized that, rather than motivating an increased search for information, a lack of knowledge about a specific socio-political issue will (a) foster feelings of dependence on the government, which will (b) increase system justification and government trust, which will (c) increase desires to avoid learning about the relevant issue when information is negative or when information valence is unknown. In other words, I suggest that ignorance – as a function of the system justifying tendencies it may activate – may, ironically, breed more ignorance. The rational for these predictions is discussed in Chapter 1. Then, in the contexts of energy, environmental, and economic issues, I present seven studies that: (a) provide evidence for this specific psychological chain (i.e., ignorance about an issue → dependence → government trust → avoidance of information about that issue); (b) shed light on the role of threat and motivation in driving the second and third links in this chain; and (c) illustrate the unfortunate consequences of this process for individual action in those contexts that may need it most.

Steven Shepherd (2012). On the Perpetuation of Ignorance: System Dependence, System Justification, and the Motivated Avoidance of Socio-Political Information. UWSpace. http://hdl.handle.net/10012/6813