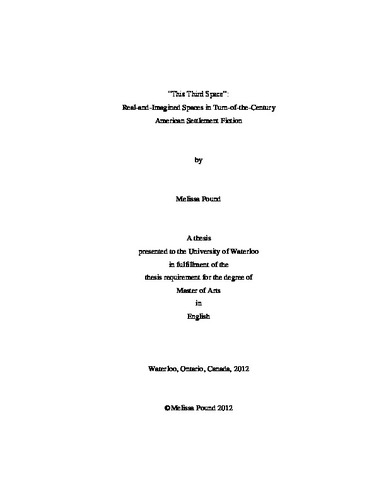 This thesis is a literary analysis of American settlement fiction, using a spatially-informed cultural historicist approach. The settlement movement in the U.S. was both a Progressive Era reform movement and a precursor to modern-day social welfare systems. As such, it has typically been viewed in either laudatory or censorious terms –- as an innovative force for social good, or as a negative source of social control. Drawing on Edward Soja’s concept of Thirdspace as a uniquely generative and semiotically rich cultural site, and focusing on Hull House as an example of Thirdspace, I argue that the settlement movement was in fact an extraordinarily multivalent phenomenon. Hull House (and the many settlement houses modeled after it) instantiated issues of gender, class, and race in complex ways that both reflected and refracted larger patterns in American culture. Moreover, these same patterns are evident in fiction that incorporates the spaces of the settlement house and the figure of the settlement worker. Contextualized readings of five novels (Elia Wilkinson Peattie’s The Precipice, Clara Laughlin’s Just Folks, Hervey White’s Differences, Sherwood Anderson’s Marching Men, and W.E.B. Du Bois’ The Quest of the Silver Fleece) provide evidence of the value of further recovering this dramatically understudied area of settlement discourse.