Delineating Base Flow Contribution Areas for Streams: A Model Comparison 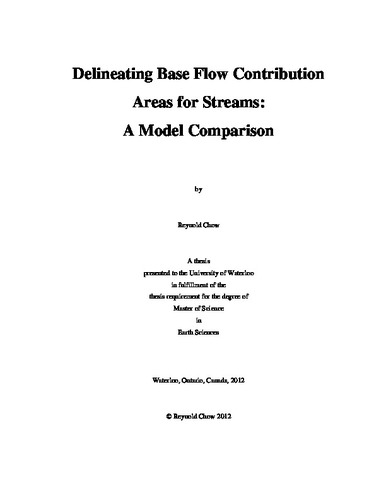 This study extends the methodology for the delineation of capture zones to base flow contribution areas for stream reaches under the assumption of constant average annual base flow in the stream. The methodology is applied to the Alder Creek watershed in southwestern Ontario, using three different numerical models. The three numerical models chosen for this research were Visual Modflow, Watflow and HydroGeoSphere. Capture zones were delineated for three different stream segments with reverse particle tracking and reverse transport. The modelling results showed that capture zones delineated for streams are sensitive to the discretization scheme and the different processes considered (i.e. unsaturated zone, surface flow). It is impossible to predict the size, shape and direction of the capture zones delineated based on the model selected. Also, capture zones for different stream segments will reach steady-state at different times. In addition, capture zones are highly sensitive to differences in hydraulic conductivity due to calibration. It was found that finite element based integrated groundwater - surface water models such as HydroGeoSphere are advantageous for the delineation of capture zones for streams. Capture zones created for streams are subject to greater uncertainty than capture zones created for extraction wells. This is because the hydraulic gradients for natural features are very small compared to those for wells. Therefore, numerical and calibration errors can be the same order of magnitude as the gradients that are being modelled. Because of this greater uncertainty, it is recommended that particle tracking and reverse transport always be used together when delineating capture zones for stream reaches. It is uncertain which probability contour to choose when the capture zone is delineated by reverse transport alone. The reverse particle tracks help choose the appropriate probability contour to represent the stream capture zone.