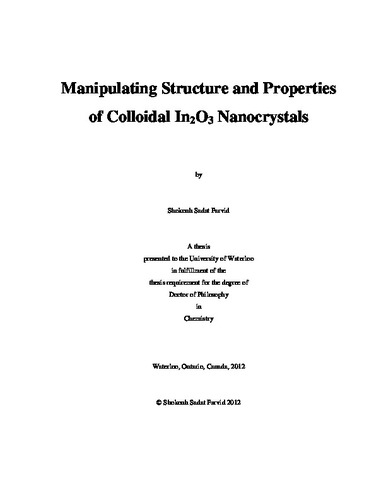 Transparent conducting oxides (TCOs) have attracted extensive attention for decades due to their remarkable applications in optoelectronic devices. The development of functional nanostructured TCOs with unique properties, and an expansion of their functionalities are therefore research directions of significant current interest. Among TCOs, In2O3 is widely applied because of its high charge carrier concentration and mobility, as well as the ease with which it can be deposited as a thin film. The important role of surfaces in tuning properties in materials shows the importance of studying nanostructured materials with high surface areas. In this thesis I examined the synthesis of phase-controlled In2O3 nanocrystals (NCs) and showed the effect of doping and composition on the materials properties. Owing to the relevance of size, structure, and composition for manipulating properties of nanomaterials, synthesis of well-defined nanocrystals of pure and doped In2O3 has been of considerable interest for fundamental studies as well as for technological applications. Phase controlled synthesis of colloidal In2O3 NCs was achieved via a size-structure correlation. The study of the morphological and phase transformations of In2O3 NCs during their growth in solution implies that corundum (rh-In2O3) is a transient structure in the formation of cubic bixbyite (bcc-In2O3) phase. The formation of NCs smaller than 5 nm leads to the spontaneous stabilization of metastable phases owing to the surface energy and/or surface stress contributions, both of which are dependent on size. The growth beyond the critical size lowers the potential energy barrier height and causes the nanocrystal phase transformation. In addition, phase transformation of colloidal In2O3 NCs in the temperature range of 210-260 ˚C during their synthesis in solution was studied using a combination of structural and spectroscopic methods, including X-ray diffraction (XRD), transmission electron microscopy (TEM) and extended X-ray absorption fine structure (EXAFS) spectroscopy, and analyzed data using Johnson-Mehl-Avrami-Erofeyev-Kholmogorov (JMAEK) and interface nucleation models. The phase transformation occurs via nucleation of bcc-In2O3 phase at the interface between contacting rh-In2O3 NCs, and propagates rapidly throughout the NC volume. In situ high temperature XRD patterns collected during nonisothermal treatment of In2O3 NCs reveal that phase transformation of smaller NCs occurs at a faster rate and lower temperature, which is associated with the higher packing density and contact formation probability of smaller nanoparticles. Owing to the fact that NC surfaces and interfaces play a key role in phase transformation, their control through the synthesis conditions and reaction kinetics is an effective route to manipulating NC structure and properties. Although, doping semiconductor NCs is crucial for enhancing and manipulating their functional properties, the doping mechanism and the effects of dopants on the nanocrystal growth and structure are not well understood. We show that dopant adsorption to the surfaces of colloidal In2O3 NCs during incorporation inhibit NC growth and leads to the formation of metastable rh-In2O3 for nanocrystals smaller than ca. 5 nm. Direct comparison between Cr3+ and Mn3+ dopants indicates that the nanocrystal structure directly determines the dopant incorporation limits and the dopant electronic structure, and can be predicted and controlled. These results enable a new approach to designing multifunctional nanostructures and understanding the early stages of crystal growth in the presence of impurities. Nanocrystalline films fabricated from colloidal Cr3+- and Mn3+- doped In2O3 nanocrystals exhibit strong ferromagnetic ordering up to room temperature. The absence of ferromagnetism in the free standing transition metal (TM)-doped In2O3 NCs and appearance of ferromagnetism only in TM:In2O3 films prepared from colloidal NCs, are attributed to the formation of extended structural defects, proposed to be oxygen vacancies at the NC interfaces. In fact, in TM:In2O3 NCs with high surface to volume ratios, more oxygen vacancies are present at the surface of NCs and networking of NCs in the prepared film causes an increase in grain-boundary defects at the interfaces. A comparative study of magnetic circular dichroism (MCD) spectra of Cr3+-doped bcc-In2O3 and Cr3+-doped rh-In2O3 revealed that Cr3+ ions distinctly occupy different symmetry sites in corundum and bixbyite crystal structure of In2O3. In fact, a change in the crystal structure of In2O3 from bixbyite to corundum changes the electronic configuration of Cr3+. By manipulating the NC composition and structure in solution we applied a one-step synthesis of ternary gallium indium oxide (GIO) nanocrystals with variable crystal structures. The structures and sizes of GIO NCs can be simultaneously controlled, owing to the difference in the growth kinetics of In2O3 and Ga2O3 NCs, and the polymorphic nature of both materials. These dependences, induced by the interactions between specific defect sites acting as electron donors and acceptors, were used to achieve broad emission tunability in the visible spectral range at room temperature. The nature of the photoluminescence is identified as donor -acceptor pair (DAP) recombination and changes with increasing indium content owing to the changes in the energy states of, and interactions between, donors and acceptors. Structural analysis of GIO nanocrystals by extended X-ray absorption fine structure spectroscopy reveals that In3+ occupies only octahedral, rather than tetrahedral, sites in the spinel-type γ-Ga2O3 nanocrystal host lattice, until reaching the substitutional incorporation limit of ca. 25%. The emission decay dynamics is also strongly influenced by the nanocrystal structure and composition.