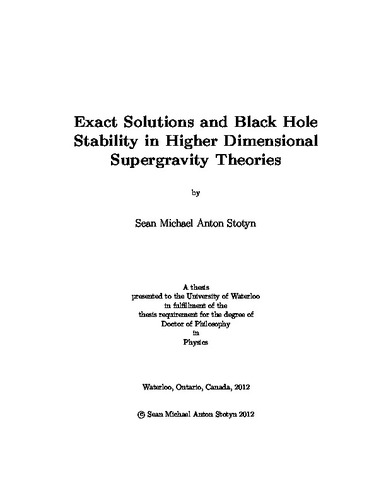 This thesis examines exact solutions to gauged and ungauged supergravity theories in space-time dimensions D⩾5 as well as various instabilities of such solutions. I begin by using two solution generating techniques for five dimensional minimal ungauged supergravity, the first of which exploits the existence of a Killing spinor to generate supersymmetric solutions, which are time-like fibrations over four dimensional hyper-Kähler base spaces. I use this technique to construct a supersymmetric solution with the Atiyah-Hitchin metric as the base space. This solution has three independent parameters and possesses mass, angular momentum, electric charge and magnetic charge. Via an analysis of a congruence of null geodesics, I determine that the solution contains a region with naked closed time-like curves. The centre of the space-time is a conically singular pseudo-horizon that repels geodesics, otherwise known as a repulson. The region exterior to the closed time-like curves is outwardly geodesically complete and possesses an asymptotic region free of pathologies provided the angular momentum is chosen appropriately. The second solution generating technique exploits a hidden G2 symmetry in five dimensional minimal supergravity. I use this hidden symmetry approach to construct the most general black string solution in five dimensions, which is endowed with mass, angular momentum, linear momentum, electric charge and magnetic charge. This general black string satisfies the first law of thermodynamics, with the Bekenstein-Hawking entropy being reproduced via a microstate counting in terms of free M-branes in the decoupling limit. Furthermore it reduces to all previously known black string solutions in its various limits. A phase diagram for extremal black strings is produced to draw conclusions about extremal black rings, in particular why supersymmetric black rings exhibit a lower bound on the electric charge. The same phase diagram further suggests the existence of a new class of supersymmetric black rings, which are completely disconnected from the previously known class. A particular limit of this general black string is the magnetically charged black string, whose thermodynamic phase behaviour and perturbative stability were previously studied but not very well understood. I construct magnetically charged topological solitons, which I then show play an important role in the phase structure of these black strings. Topological solitons in Einstein-Maxwell gravity, however, were previously believed to generically correspond to unstable "bubbles of nothing" which expand to destroy the space-time. I show that the addition of a topological magnetic charge changes the stability properties of these Kaluza-Klein bubbles and that there exist perturbatively stable, static, magnetically charged bubbles which are the local vacuum and the end-point of Hawking evaporation of magnetic black strings. In gauged supergravity theories, bubbles of nothing are stabilised by the positive energy theorem for asymptotically anti-de Sitter space-times. For orbifold anti-de Sitter space-times in odd dimensions, a local vacuum state of the theory is just such a bubble, known as the Eguchi-Hanson soliton. I study the phase behaviour of orbifold Schwarzschild-anti-de Sitter black holes, thermal orbifold anti-de Sitter space-times, and thermal Eguchi-Hanson solitons from a gravitational perspective; general agreement is found between this analysis and the previous analysis from the gauge theory perspective via the AdS/CFT correspondence. I show that the usual Hawking-Page phase structure is recovered and that the main effect of the soliton in the phase space is to widen the range of large black holes that are unstable to decay despite the positivity of their specific heat. Furthermore, using topological arguments I show that the soliton and orbifold AdS geometry correspond to a confinement phase in the boundary gauge theory while the black hole corresponds to a deconfinement phase. An important instability for rotating asymptotically anti-de Sitter black holes is the superradiant instability. Motivated by arguments that the physical end point of this instability should describe a clump of scalar field co-rotating with the black hole, I construct asymptotically anti-de Sitter black hole solutions with scalar hair. Perturbative results, i.e. low amplitude boson stars and small radius black holes with low amplitude scalar hair, are presented in odd dimensions relevant to gauged supergravity theories, namely D=5,7. These solutions are neither stationary nor axisymmetric, allowing them to evade the rigidity theorem; instead the space-time plus matter fields are invariant under only a single helical Killing vector. These hairy black holes are argued to be stable within their class of scalar field perturbations but are ultimately unstable to higher order perturbative modes.