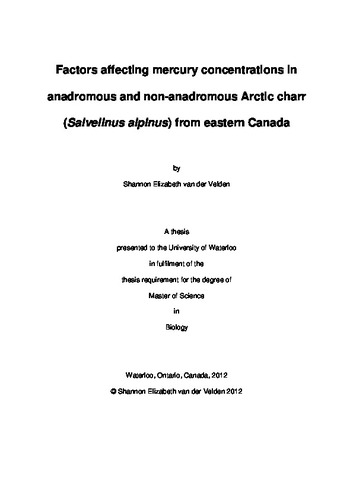 Mercury concentrations in freshwater and marine biota are an ongoing concern, even in areas remote from local point sources, such as in the Canadian Arctic and sub-Arctic. Anadromous Arctic charr, which feed in the marine environment, have lower mercury concentrations than non-anadromous Arctic charr, which feed strictly in freshwater, but the two life-history forms have rarely been studied together, and the mechanisms driving the difference are unclear. Here, data from nine pairs of closely-located anadromous and non-anadromous Arctic charr populations were used to explore the impact of biological and life-history factors on individual total mercury concentration ([THg]) across a range of latitudes (49 – 81° N) in eastern Canada. From six of these sampling locations, additional samples of lower trophic level biota (i.e., algae, invertebrates, and forage fishes) were obtained in order to investigate patterns of total mercury (THg) and methylmercury (MeHg) biomagnification in the marine and lacustrine foodwebs supporting Arctic charr. Arctic charr mean [THg] ranged from 20 to 114 ng/g wet weight (ww) in anadromous populations, and was significantly higher in non-anadromous populations (all p < 0.01), ranging from 111 to 227 ng/g ww. Within-population variations in Arctic charr [THg] were best explained by fish age, and were also positively related to fork-length and δ15N-inferred trophic level. Across all sampling sites, the relationship between Arctic charr [THg] and fish age was significant and statistically similar in both life-history types, but only the non-anadromous fish demonstrated a significant relationship with trophic level. Fork-length and site latitude did not explain significant additional variation in Arctic charr [THg] across sampling locations. Trophic magnification factors were 1.98 – 5.19 for THg and 3.02 – 6.69 for MeHg in lacustrine foodwebs, and 1.59 – 2.82 for THg and 2.72 – 5.70 for MeHg in marine foodwebs, and did not differ significantly between the two feeding habitats for either THg or MeHg. The biomagnification rate of MeHg exceeded that of THg in both habitats. Mercury concentrations at the base of the foodweb were higher in the lacustrine environment (estimated at 17 – 139 ng/g dw for THg and 5 – 42 ng/g dw for MeHg) than in the marine environment (8 – 39 ng/g dw for THg and 1 – 11 ng/g dw for MeHg). The proportion of mercury in the methylated form was related to trophic level, and the relationship was statistically similar in the lacustrine and marine habitats. There was no effect of site latitude on mercury concentrations in marine or lacustrine biota, thus the difference between feeding habitats was consistent across a range of latitudes (56 – 72°N) in eastern Canada. We conclude that a difference in prey mercury concentration, driven by differential mercury concentrations at of the base of the lacustrine and marine foodwebs, is important for explaining the difference in mercury concentration between anadromous and non-anadromous in Arctic charr.