Trauma and Beyond: Ethical and Cultural Constructions of 9/11 in American Fiction 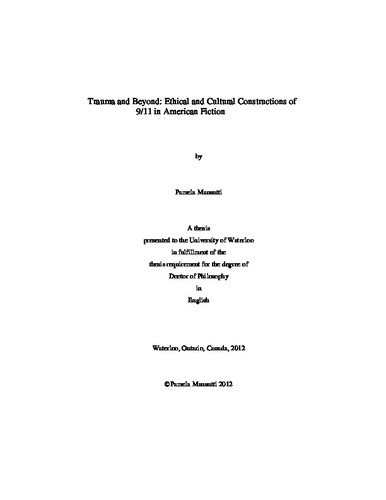 My dissertation focuses on a set of Anglo-American novels that deal with the events of 9/11. Identifying thematic and stylistic differences in the fiction on this topic, I distinguish between novels that represent directly the jolts of trauma in the wake of the attacks, and novels that, while still holding the events as an underlying operative force in the narrative, do not openly represent them but envision their long-term aftermath. The first group of novels comprises Lynne Sharon Schwartz’s The Writing on the Wall (2005), Don DeLillo’s Falling Man (2007) and Jonathan Safran Foer’s Extremely Loud and Incredibly Close (2005). The second one includes Lorrie Moore’s A Gate at the Stairs (2009), John Updike’s Terrorist (2006) and Joseph O’Neill’s Netherland (2008). Drawing on concepts from trauma theory, particularly by Cathy Caruth and Dominick LaCapra, and combining them with the ethical philosophies of Levinas and Heidegger, I argue that the constructions of 9/11 in Anglo-American fiction are essentially twofold: authors who narrate 9/11 as a tragic human loss in the city of New York turn it into an occasion for an ethical dialogue with the reader and potentially with the “Other,” whereas authors who address 9/11 as a recent sociopolitical event transform it into a goad toward a bitter cultural indictment of the US middle-class, whose ingrained inertia, patriotism and self-righteousness have been either magnified or twisted by the attacks. Considering processes of meaning-making, annihilation, ideological reduction and apathy that arose from 9/11 and its versions, I have identified what could be called, adapting Peter Elbow’s expression from pedagogical studies, the “forked” rhetoric of media and politics, a rhetorical mode in which both discourses are essentially closed, non-hermeneutic, and rooted in the same rationale: exploiting 9/11 for consensus. On the contrary, in what I call the New-Yorkization of 9/11, I highlighted how the situatedness of the public discourses that New Yorkers constructed to tell their own tragedy rescues the Ur-Phaenomenon of 9/11 from the epistemological commodification that intellectual, mediatic and political interpretations forced on it. Furthermore, pointing to the speciousness of arguments that deem 9/11 literature sentimental and unimaginative, I claim that the traumatic literature on the attacks constitutes an example of ethical practice, since it originates from witnesses of the catastrophe, it represents communal solidarity, and it places a crucial demand on the reader as an empathic listener and ethical agent. Ethical counternarratives oppose the ideological simplification of the 9/11 attacks and develop instead a complex counter-rhetoric of emotions and inclusiveness that we could read as a particular instantiation of an ethics of the self and “Other.” As much as the 9/11 “ethical” novels suggest that “survivability” in times of trauma depends on “relationality” (J. Butler), the “cultural” ones unveil the insensitivity and superficiality of the actual US society far away from the site of trauma. The binary framework I use implies that, outside of New York City, 9/11 is narrated neither traumatically (in terms of literary form), nor as trauma (in terms of textual fact). Consequently, on the basis of a spatial criterion and in parallel to the ethical novels, I have identified a category of “cultural” fiction that tackles the events of 9/11 at a distance, spatially and conceptually. In essence, 9/11 brings neither shock, nor promise of regeneration to these peripheral settings, except for Joseph O’Neill’s Netherland, a story in which we are returned to a post-9/11 New York where different ethnic subjects can re-negotiate creatively their identities. The cultural novels are ultimately pervaded by a mode of tragic irony that is unthinkable for the ethical novels and that is used in these texts to convey the inanity and hubris of a politically uneducated and naïve America – one that has difficulties to point Afghanistan on a map, or to transcend dualistic schemes of value that embody precisely Bush’s Manichaeism. The potential for cultural pluralism, solidarity and historical memory set up by the New York stories does not ramify into the America that is far away from the neuralgic epicenter of historical trauma. This proves that the traumatizing effects and the related ethical calls engendered by 9/11 remain confined to the New York literature on the topic.