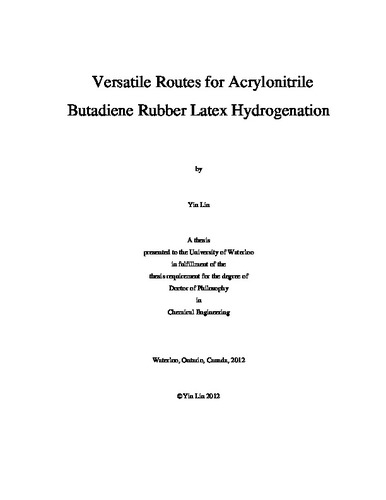 The direct catalytic hydrogenation of acrylonitrile-butadiene-rubber in latex form was studied for the development of a simple process for the modification of unsaturated diene-based polymers. Acrylonitrile-butadiene-rubber, known as NBR, is a rubber synthesized from acrylonitrile and butadiene (monomers) via copolymerization. It has been widely utilized as oil resistant rubber components in industry. Selective hydrogenation of the residual carbon-carbon double bonds (C=Cs) in the NBR backbone could improve its physical and chemical properties which greatly extend its range of application and lifetime. However, the current hydrogenation procedure involves a number of cumbersome steps which substantially increase the production cost. Hence, it is worthwhile developing new technology which HNBR could be synthesized in a cheaper and environmentally friendly way. Considerable efforts have been undertaken to realize this goal. Among them, hydrogenation of commercial NBR latex becomes especially attractive and promising. Direct hydrogenation of NBR in the latex not only avoids using large amounts of organic solvent which is required in polymer solution hydrogenation but also produces hydrogenated-NBR (HNBR) in the latex form which can be utilized for painting or coating. It has been reported that the commercial NBR latex could successfully be hydrogenated using RhCl(PPh3)3 with added triphenylphosphine (PPh3). High quality HNBR latex was obtained after the reaction. However, the hydrophobicity of RhCl(PPh3)3 and PPh3 greatly restrict their separation and diffusion in the NBR latex, resulting in a very low activity in the heterogeneous NBR latex system. In order to improve the process of NBR latex hydrogenation using the RhCl(PPh3)3/PPh3 catalytic system, an in-situ hydrogenation process was developed where RhCl(PPh3)3 was directly synthesized from the water-soluble catalyst precursor RhCl3 and PPh3 in the NBR latex. The catalyst precursor RhCl3 is soluble in the aqueous phase of the NBR latex and PPh3 was well dispersed in the aqueous NBR latex after adding small amounts of alcohol. Compared with using pre-made solid catalyst, the in-situ synthesized catalyst in the NBR latex could quickly be transported into the polymer particles and faster hydrogenation reaction was observed. In addition, the influence of various operational conditions on the hydrogenation rate; such as catalyst concentration, latex system composition, reaction temperature and hydrogen pressure have been studied. With the success of NBR latex hydrogenation using RhCl(PPh3)3 catalyst, two water-soluble analogs of RhCl(PPh3)3, RhCl(TPPMS)3 (TPPMS = Monosulfonated Triphenylphosphane) and RhCl(TPPTS)3, (TPPTS = Trisulfonated Triphenylphosphane) were then used for NBR latex hydrogenation. It was found that the difference of their solubility in water greatly affected their activities in NBR latex hydrogenation. Successful hydrogenation was achieved using the RhCl(TPPMS)3 catalyst while only low conversion was observed when using the RhCl(TPPTS)3 catalyst. The catalysts retention in the polymer is also in agreement with the reaction results. High conversion could only be achieved when the catalyst diffused into the polymer particles in the latex. Using the RhCl(TPPMS)3, the reaction could be carried out in a temperature range of 70°C to 120°C. And no co-catalyst ligand (i.e. TPPMS) was required for catalyst diffusion or reaction. In addition, the effects of the particle size of the NBR latex and the molecular weight of NBR (gel fraction) on hydrogenation were also investigated using lab made “in-house” NBR latices. It was found that the hydrogenation reaction was much faster with smaller particle size. It was also observed that the gel fraction in the latex particles greatly influenced the mobility of the polymer chains within the particles. In addition to the rhodium based catalysts, ruthenium based catalysts have also been investigated for NBR latex hydrogenation. With the recent findings of the hydrogenation activity of the Grubbs type metathesis catalyst, the hydrogenation of NBR latex was studied first using the second generation of Grubbs catalyst (G2). It was found using the G2 catalyst with small addition of organic solvent such as mono-chlorobenzene (MCB) to dissolve the catalyst resulted in a successful hydrogenation in NBR latex. Meanwhile, the metathesis activity of the G2 catalyst was also measured during the hydrogenation reaction. Comparing with conventional ruthenium catalysts, the multifunctional G2 catalyst benefited the NBR latex hydrogenation process by controlling its molecular weight change. The increase of molecular weight within hydrogenation reaction was partially offset by a synchronous metathesis reaction between NBR and the added of chain transfer agent (CTA). As a result, no visible gel was observed in the final HNBR product. In addition, the kinetic behavior of the hydrogenation was systematically studied with respect to the catalyst concentration, hydrogen pressure as well as NBR concentration. The apparent activation energy over the temperature range of 80-130°C for the hydrogenation of metathesized NBR was also measured. Further experiments showed that the second generation of Hoveyda-Grubbs catalyst (HG2) could be employed for the NBR latex hydrogenation even without adding any organic co-solvent to dissolve the catalyst. Although HG2 catalyst is insoluble in water, it could be well dispersed in aqueous system with the addition of certain surfactants. A fast catalytic hydrogenation (e.g. TOF > 7000 h-1 at 95 mol.% conversion) was achieved and successful hydrogenation was still observed under very low catalyst concentration. Compared with using G2 catalyst, the degree of metathesis reaction under HG2 in this organic solvent free process was very limited. As a result of this research project, different catalysts were successfully developed for hydrogenation of NBR in latex. A significant milestone was achieved in improving polymer hydrogenation technology.