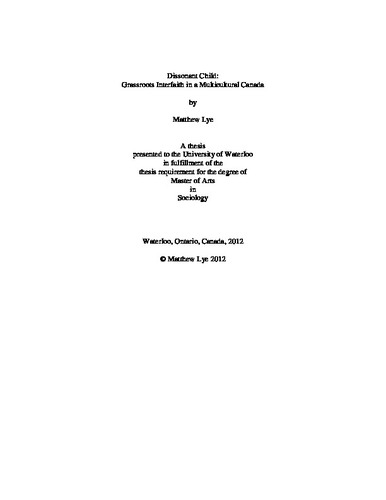 While Canada's increasing ethnic and racial diversity have received a great deal of attention in recent years, the pluralization of its religious makeup has been largely ignored. As a result, political and societal responses to religious diversity have been mixed. This study highlights one response to religious difference at the community level. Using qualitative research methods I highlight the ways in which Interfaith Grand River, a group of religiously diverse individuals in Kitchener-Waterloo Ontario, "build bridges" between local religious groups and the larger K-W community. I use the theories of Charles Taylor and Jurgen Habermas, among others, to locate IGR's dialogue-centred approach within larger discussions about the importance of recognizing religion and religious difference in the public sphere. I argue that interfaith practices are a "dissonant child" of multicultural policies, sharing an emphasis on inclusion while critiquing multiculturalism' blindness to religious issues. From this, I argue that faith-based diversity needs to be addressed not only in national policies, but also in communities through individual relationship building and dialogue.