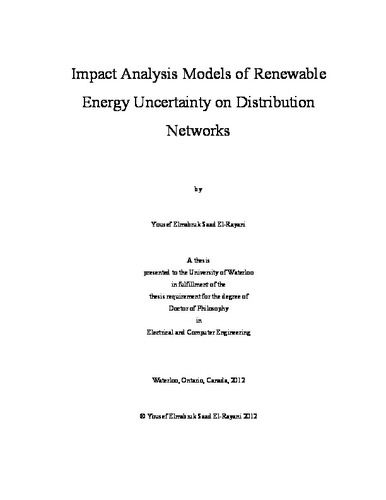 In the recent years, governments have encouraged the utilization of renewable energy by providing incentives to investors, and enhancing traditional practices in the sector. For example, in Ontario, Canada, local distribution companies can now legally own and operate up to 10 MW generating plant per location as long as it is from a renewable source. Although this trend results in some operational benefits for the host networks, it also creates specific technical challenges and economic problems. New modeling approaches are needed to account for the main features of power produced by these facilities, namely, the uncertainty and uncontrollability. The uncertainty of power produced by weather-based generating facilities affects the decisions of different activities related to the operation of distribution systems. Examples of these tasks include power procurement decisions, the assessment of voltage magnitude variation, and reactive power management. If not properly included, uncertainty could result in non optimal outcome of operational activities of a distribution system operator. Based on different optimization techniques, the thesis introduces several models that capture the uncertain behavior of renewable resources. Two operational tasks were selected for application using the enhanced models: economical operation of distribution system and impact assessment on voltage magnitude. The power procurement problem is an operational challenge to acquire the correct economic mix of power purchases to supply the demand of a local distribution company. Three models have been presented to formulate the power procurement problem with a consideration of the stochastic nature of renewable generation. These models select the optimal quantities of bilateral contracts under uncertain renewable generation and give the option to decision makers to recalculate the powers from other sources. In one of these proposed models, the mean-variance theory is utilized to evaluate the risk associated with the variation of renewable power output on the financial efficiency of a local distribution company. Unlike previous studies, in which renewable power production is identified as a decision variable, in this work the generation from these units is represented as a parameter to model their feature of uncontrollability. Comparison of results obtained from using the proposed models showed that the degree of uncertainty plays an important role in selecting the proper mix. In general, stochastic based algorithms are superior to deterministic approaches when increasing contributions from renewable resources are considered. A major technical problem that may be caused by the uncertain generation of renewable units is the increase of voltage variation. The second part of the thesis introduces a methodology based on a Monte-Carlo technique to assess new installation depending on its impact on the quality of supply voltage. Two different standard measures for supply voltage quality are applied in this approach to provide the decision maker a tool that can be used to authorize new connections of renewable generation. The consistency of results obtained by the two indices applied in the proposed methodology encourages adopting the proposed approach for evaluating the impact of new connections of renewable resources. The models proposed in the thesis contribute to promote safer integration of renewable resources in distribution systems by modeling two main features: uncertainty and non-controllability.