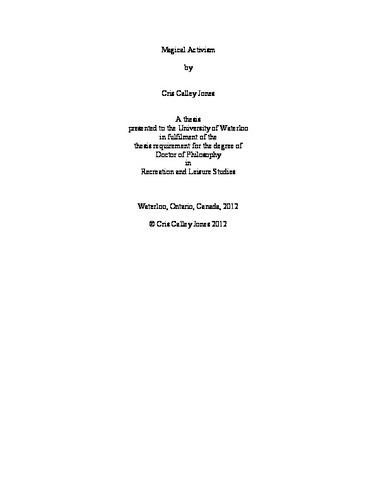 Lack of knowledge about the lived experience of leisure is a result of the distanced, objective way in which it has primarily been studied (Hemingway, 1999), and there is an increased interest in conceptualizing leisure as a dynamic force for social and political change (Shaw, 1994; 2001; Mair, 2002/03; Sharpe, 2008). Constructs such as resistance (Shaw, 2001), critically reflexive leisure (Mair, Sumner & Rotteau, 2008) and pleasure-politics (Sharpe, 2008) illuminate the role and potential of individual and collective leisure in social change. Within a critical constructionist, qualitative research design, this study of witchcamps and magical activism was informed by feminist, queer, and leisure theories. Data were collected through participant-observation at 2 witchcamps, 21 semi-structured intensive interviews, 11 focused interviews, and 19 elicited electronic text submissions. This research reflects the emerging trend within leisure studies of using qualitative approaches and reflexivity to look at our own leisure (Axelsen, 2009; Collinson, 2007; Havitz, 2007; Lashua & Fox 2006; MacKellar, 2009; McCarville, 2007; Parry & Johnson, 2007; Rowe, 2006; Samdahl, 2008). As a member of the witchcamp community under study, the research was carried out in the researcher’s own community ‘backyard’ (Glesne & Peshkin, 1992), and as insider research, it provides a detailed description of alternative culture from the viewpoint of a professional researcher and personal insider. Data analysis followed a constant-comparative method, and employed memo writing, thematic, and focused coding. The study provides insight into the intersection of leisure, ecospirituality, community, and social change. Setting, activities, beliefs, and community intersect to function as a container for personal and social transformation, and provide an ‘antidote’ to alienation and isolation experienced by individuals in the dominant culture. The study provides empirical evidence of the centrality of leisure to community responsibility for broader social, political and environmental concerns, as theorized by Arai and Pedlar (2003). This research furthers the perspective that community is multidimensional, and has the potential to unify marginalized groups (Arai & Pedlar, 2003). The findings of this study also reflect Mair’s (2006) conceptualization of community as one that provides a space for celebration of diversity.