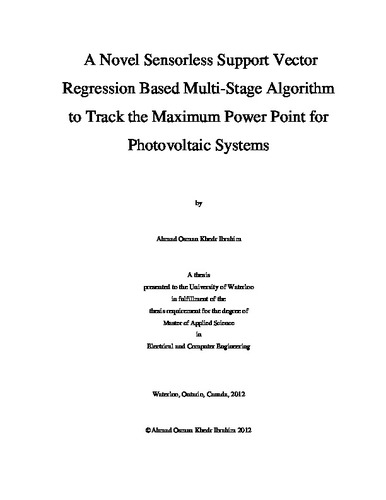 Solar energy is the energy derived from the sun through the form of solar radiation. Solar powered electrical generation relies on photovoltaic (PV) systems and heat engines. These two technologies are widely used today to provide power to either standalone loads or for connection to the power system grid. Maximum power point tracking (MPPT) is an essential part of a PV system. This is needed in order to extract maximum power output from a PV array under varying atmospheric conditions to maximize the return on initial investments. As such, many MPPT methods have been developed and implemented including perturb and observe (P&O), incremental conductance (IC) and Neural Network (NN) based algorithms. Judging between these techniques is based on their speed of locating the maximum power point (MPP) of a PV array under given atmospheric conditions, besides the cost and complexity of implementing them. The P&O and IC algorithms have a low implementation complexity but their tracking speed is sluggish. NN based techniques are faster than P&O and IC. However, they may not provide the global optimal point since they are prone to multiple local minima. To overcome the demerits of the aforementioned methods, support vector regression (SVR) based strategies have been proposed for the estimation of solar irradiation (for MPPT). A significant advantage of SVR based strategies is that it can provide the global optimal point, unlike NN based methods. In the published literature of SVR based MPPT algorithms, however, researchers have assumed a constant temperature. The assumption is not plausible in practice as the temperature can vary significantly during the day. The temperature variation, in turn, can remarkably affect the effectiveness of the MPPT process; the inclusion of temperature measurements in the process will add to the cost and complexity of the overall PV system, and it will also reduce the reliability of the system. The main goal of this thesis is to present a novel sensorless SVR based multi-stage algorithm (MSA) for MPPT in PV systems. The proposed algorithm avoids outdoor irradiation and temperature sensors. The proposed MSA consists of three stages: The first stage estimates the initial values of irradiation and temperature; the second stage instantaneously estimates the irradiation with the assumption that the temperature is constant over one-hour time intervals; the third stage updates the estimated value of the temperature once every one hour. After estimating the irradiation and temperature, the voltage corresponding to the MPP is estimated, as well. Then, the reference PV voltage is given to the power electronics interface. The proposed strategy is robust to rapid changes in solar irradiation and load, and it is also insensitive to ambient temperature variations. Simulations studies in PSCAD/EMTDC and Matlab demonstrate the effectiveness of the proposed technique.