Territoriality and Behaviour On and Around Large Vertical Publicly-Shared Displays 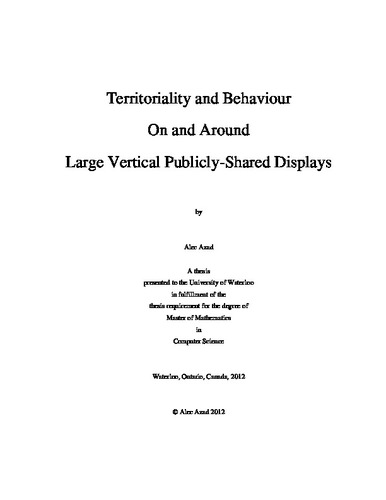 Large displays and information kiosks are becoming increasingly common installations in public venues to provide an efficient self-serve means for patrons to access information and/or services. They have evolved over a relatively short period of time from non-digital, non-interactive static displays to more elaborate media-rich digital interactive systems. While the content and purposes of kiosks have changed, they are still largely based on the traditional single-user-driven design paradigm despite the fact that people often venture to these venues in small social groups, i.e., with family and/or friends. This often limits how groups collaborate and forces transactions to be serialized. This thesis explores design constraints for interaction by multiple social groups in parallel on shared large vertical displays. To better understand design requirements for these systems, this research is separated into two parts: a preliminary observational field study and a follow-up controlled study. Using an observational field study, fundamental patterns of how people use existing public displays are studied: their orientation, positioning, group identification, and behaviour within and between social groups just-before, during, and just-after usage. These results are then used to motivate a controlled experiment where two individuals or two pairs of individuals complete tasks concurrently on a low-fidelity large vertical display. Results from the studies demonstrate that vertical surface territories are similar to those found in horizontal tabletops in function, but their definitions and social conventions are different. In addition, the nature of use-while-standing systems results in more complex and dynamic physical territories around the display. We show that the anthropological notion of personal space must be slightly refined for application to vertical displays.