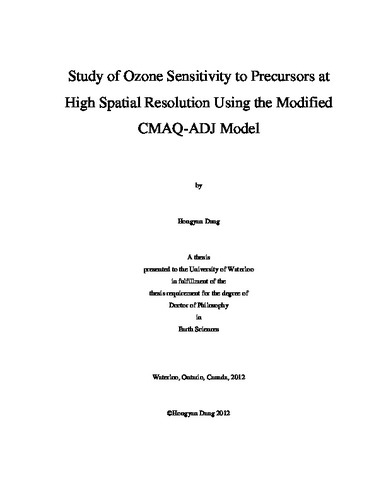 In this thesis, I apply the adjoint for the Community Multiscale Air Quality model (hereafter CMAQ-ADJ) in a high spatial resolution study of the sensitivity of ozone to several of its precursors in the regions surrounding the Great Lakes. CMAQ-ADJ was originally developed for low spatial resolution applications. In order to use it in high spatial resolution (12 km) studies, it was necessary to resolve a conflict between the pre-set fixed output time step interval in CMAQ-ADJ and the CMAQ-calculated irregular synchronization time-step and also to modify the meteorological interface for the backward model integrations. To increase computation efficiency, the chemistry time-step in the modified CMAQ-ADJ is checkpointed instead of being re-calculated in the backward part of the model as before. I used the modified model to analyze the sensitivity of ozone to precursor species for cases of assumed high ozone episode in two target locations in southwestern and east-central Ontario. The studies examined the influence of pre-existing ozone, NO, CO, anthropogenic volatile organic compounds (VOCs) and isoprene on ozone level changes for the 69 hours immediately preceding the assumed high ozone event. The results are dominated by the long-distance advection, local meteorology (lake breezes), air temperature, the underlying surface features, and emissions in the pollutant pathway. Both production and titration of ozone by NOx is evident at different times and locations in the simulations. The industrial Midwest U.S. and Ohio Valley have been shown to be an important source of anthropogenic emission of NO and most VOCs that contribute to high ozone events in southwestern and east-central Ontario. Isoprene from the northern forest suppresses ozone in both target regions, with a greater magnitude in east-central Ontario. The response of ozone level in the two selected receptor regions in Ontario to different VOCs depends on the type of VOC, the time and location they are emitted, and the air temperature. Increasing VOC emissions in urban areas such as Toronto and Ottawa in the morning can enhance the ozone level by late afternoon. Increasing VOCs except ethylene and formaldehyde in regions with large VOC/NOx ratio in the morning tends to suppress the ozone level by late afternoon. Among all the species examined, NO has the largest impact on the target ozone level changes. CO is very unlikely to significantly influence the ozone level changes in southwestern or east-central Ontario.