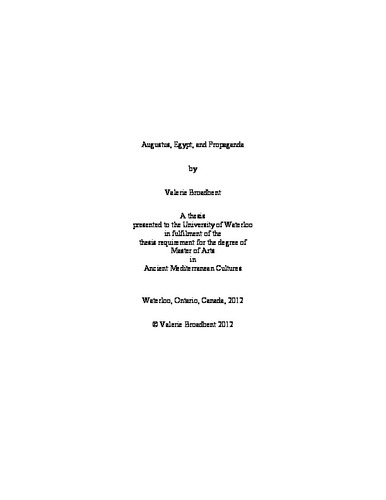 Augustus was a master of propaganda who employed Ancient and Hellenized Egypt as a means to legitimize his newly acquired power in Rome after the Battle of Actium. This thesis examines the ways in which Augustus moulded the people, imagery and religion of Egypt to suit his political needs. This was accomplished through an examination of the modified imagery of major Egyptian political figures such as Julius Caesar, Mark Antony, and Cleopatra VII. The symbolism of their images was altered to enhance Augustus’ standing in Rome. Augustus’ inspirations were also considered, namely Alexander the Great who became a significant influence for Augustus as was evident through the various similarities in their seal rings, family history, and the nature of both their roles as ‘restorers’ and ‘saviours’. The most predominant source for evidence of Augustus’ use of Egypt was found in his transportation of monumental obelisks from Egypt into the Circus Maximus and the Campus Martius. These monuments served to beautify the city while justifying Augustus’ authority in Rome. A close second to the transportation of the monumental architecture of Egypt was Augustus’ representation of the Battle of Actium upon his coinage. The battle was depicted typically with a tethered crocodile, stalks of wheat, a lituus, and a bareheaded Augustus. These actions augmented the prestige of Rome and presented Augustus as a powerful and reliable leader. In terms of religion, Augustus welcomed the practice of Egyptian cults while protecting the physical presence of Rome’s traditional religious core, the pomerium. This appealed to worshippers of both traditional and foreign cults and further enhanced his favour in Rome. Ultimately, Augustus’ actions served to increase his own prestige and credibility. This allowed Augustus to legitimize the authority of his rule and to initiate the beginnings of a stable Roman empire that would endure through Tiberius’ reign and those to follow.