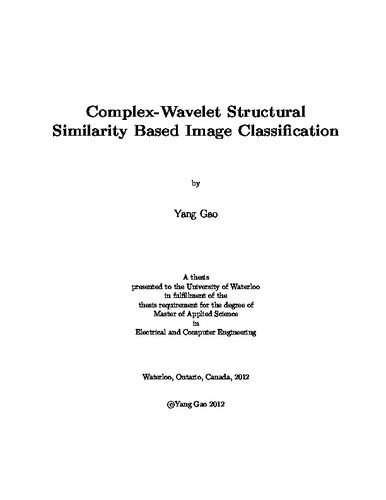 Complex wavelet structural similarity (CW-SSIM) index has been recognized as a novel image similarity measure of broad potential applications due to its robustness to small geometric distortions such as translation, scaling and rotation of images. Nevertheless, how to make the best use of it in image classification problems has not been deeply investi- gated. In this study, we introduce a series of novel image classification algorithms based on CW-SSIM and use handwritten digit and face image recognition as examples for demonstration, including CW-SSIM based nearest neighbor method, CW-SSIM based k means method, CW-SSIM based support vector machine method (SVM) and CW-SSIM based SVM using affinity propagation. Among the proposed approaches, the best compromise between accuracy and complexity is obtained by the CW-SSIM support vector machine algorithm, which combines an unsupervised clustering method to divide the training images into clusters with representative images and a supervised learning method based on support vector machines to maximize the classification accuracy. Our experiments show that such a conceptually simple image classification method, which does not involve any registration, intensity normalization or sophisticated feature extraction processes, and does not rely on any modeling of the image patterns or distortion processes, achieves competitive performance with reduced computational cost.