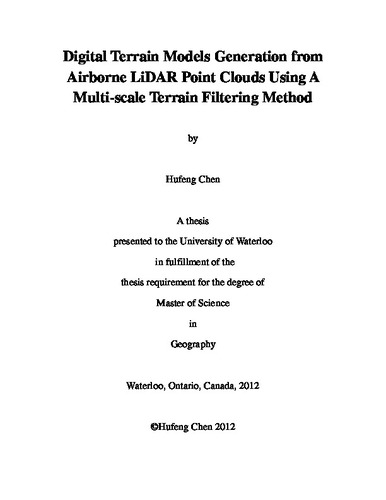 A Digital Terrain Model (DTM) is an important topographic product, required in many applications. Data needed to create a DTM was traditionally obtained via land surveying, however this method can be costly and time consuming depending on the size of the geographic area. Over time, the land surveying was partially replaced by photogrammetry. Today, airborne Light Detection and Ranging (LiDAR) has become another powerful alternative that collect 3D point clouds for digital surface models (DSM) acquisition. LiDAR is especially useful when dealing with heavily vegetated areas using a canopy penetration feature of laser pulse. Nowadays, LiDAR plays an important role in DTM generation. This thesis presents a hierarchical recovery method to generate DTMs from a cloud of 3D points composed of “single returns” and “multiple returns” from laser pulses using the idea of layering. The proposed method will begin by registering the last return points, then layering them. The layering is done by dividing the points into different height layers and assigning layer numbers to each point. The layer numbers are used as a comparison feature in a later identification process. Then a series of rasterized pyramid levels, which consists of the lowest points in each cell, are generated. After layering, outliers are removed; cells in the top level are assumed as terrain points and used as references for identifying cells in the second level. The identification process will identify the cells of the second level into terrain cells and off-terrain cells, and an interpolation will then occur in the cells which identified as off-terrain. The interpolated level will be used as references for the next level and the same process is then repeated for each level that comes after. Once this process has been completed for the bottom level, the proposed method adjusts the results based on the first return feedback, followed by another interpolation. As a result, the final DTM is produced. The developed method is data driven, and does not assume a prior knowledge about the scene complexity. The proposed method was tested with three airborne LiDAR datasets, covering different terrain types and filtering difficulties. Results illustrated that the proposed method can perform well for areas of flat terrain or gentle slope A comparative study was conducted over existing filters and showed that results of the proposed method has similar accuracy in above mentioned area and faster speed than two comparing algorithms.