Manifestation of Religious Authority on the Internet: Presentation of Twelver Shiite Authority in the Persian Blogosphere 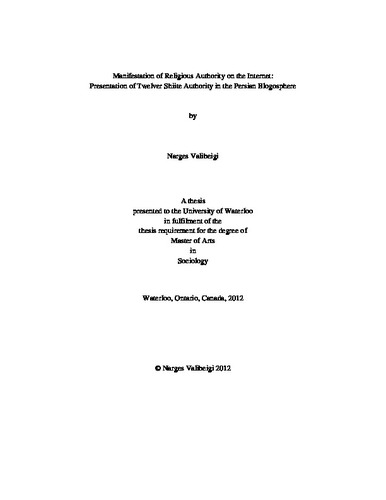 Cyberspace has diversified and pluralized people’s daily experiences of religion in unprecedented ways. By studying several websites and weblogs that have a religious orientation, different layers of religious authority including “religious hierarchy, structures, ideology, and sources” (Campbell, 2009) can be identified. Also, using Weber’s definition of the three types of authority, “rational-legal, traditional, and charismatic” (1968), the specific type of authority that is being presented on blogosphere can be recognized. The Internet presents a level of liberty for the discussion of sensitive topics in any kind of religious cyberspace, specifically the Islamic one. In this way, the Internet is expanding the number and range of Muslim voices, which may pose problems for traditional forms of religious authority or may suggest new forms of authority in the Islamic world. The interaction between the Internet and religion is often perceived as contradictory, especially when it is religion at its most conservative practice. While the international and national applications of the Internet have increased vastly, local religious communities, especially fundamentalists, perceived this new technology as a threat to their local cultures and practices. If we look at the Internet as a central phenomenon of contemporary modernity that interacts with practiced fundamentalist religious traditions, we can ask how broad the interactions are between religious fundamentalism and the Internet and whether these relations can be reconciled. More specifically, this thesis presents a study of the junction of the Internet and religious fundamentalism reviewing the presentation of Shiite religious authority on the Persian blogosphere. As a case study, Persian weblogs are studied for content analysis for this thesis. Weblogs’ texts are analyzed to find evidences for Shiite beliefs and shared identity, usages and interpretations of the main Shiite religious texts, references to the role of recognized Shiite leaders, and descriptions of Shiite structural patterns of practices and organizations. This research will demonstrate how the Internet has been culturally constructed, modified, and adapted to the Iranian community’s needs and how the Shiite fundamentalist community of Iran has been affected by it. Based on one of the most structured research in this area, the study by Baezilai-Nahon and Barzilai (2005), in this article I identify four principal dimensions of religious fundamentalism as they interact with the Internet: hierarchy, patriarchy, discipline, and seclusion.

Narges Valibeigi (2012). Manifestation of Religious Authority on the Internet: Presentation of Twelver Shiite Authority in the Persian Blogosphere. UWSpace. http://hdl.handle.net/10012/6774