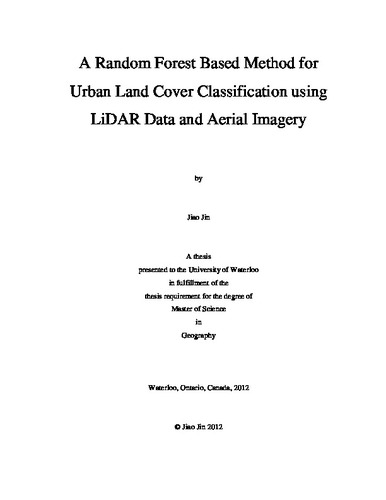 Urban land cover classification has always been crucial due to its ability to link many elements of human and physical environments. Timely, accurate, and detailed knowledge of the urban land cover information derived from remote sensing data is increasingly required among a wide variety of communities. This surge of interest has been predominately driven by the recent innovations in data, technologies, and theories in urban remote sensing. The development of light detection and ranging (LiDAR) systems, especially incorporated with high-resolution camera component, has shown great potential for urban classification. However, the performance of traditional and widely used classification methods is limited in this context, due to image interpretation complexity. On the other hand, random forests (RF), a newly developed machine learning algorithm, is receiving considerable attention in the field of image classification and pattern recognition. Several studies have shown the advantages of RF in land cover classification. However, few have focused on urban areas by fusion of LiDAR data and aerial images. The performance of the RF based feature selection and classification methods for urban areas was explored and compared to other popular feature selection approach and classifiers. Evaluation was based on several criteria: classification accuracy, impact of different training sample size, and computational speed. LiDAR data and aerial imagery with 0.5-m resolution were used to classify four land categories in the study area located in the City of Niagara Falls (ON, Canada). The results clearly demonstrate that the use of RF improved the classification performance in terms of accuracy and speed. Support vector machines (SVM) based and RF based classifiers showed similar accuracies. However, RF based classifiers were much quicker than SVM based methods. Based on the results from this work, it can be concluded that the RF based method holds great potential for recent and future urban land cover classification problem with LiDAR data and aerial images.