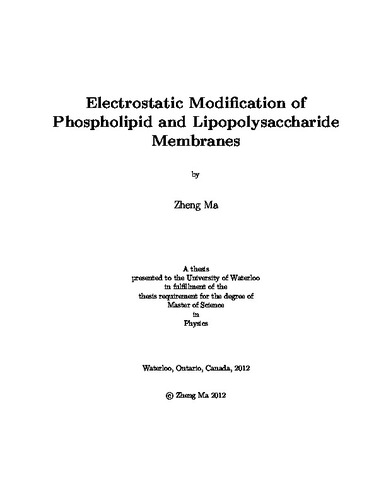 Biological membranes are quasi two-dimensional self-assembled structure, primarily serving as a barrier to the leakage of cell’s contents. The main constituents of biological membrane are various amphiphilic lipids that form bilayers in an aqueous environment. These lipids carry acidic and/or basic functional groups that ionize in water, giving some of them a net electrical charge. Such a lipid molecule, when integrated into the membrane, experiences electrostatic forces from all other charged objects around it, including ions, surrounding lipids, and other molecules such as cationic peptides. The electrostatic interaction can profoundly influence the membrane, to which many phenomena with physiological significance as well as biophysical interest can be ascribed. In this thesis, we concentrate on investigating the electrostatic properties of lipid membranes. First, we study how the electrostatic interaction affects their preferred structure. To this end, we adopt a coarse-grain model that preserves the dominant characteristics of the lipids, in which the electrostatic interaction is treated within the “renormalized” Debye-H¨uckel theory. In particular, we calculate the spontaneous curvature of a phospholipid monolayer, along with other associated quantities. Our results suggest that such divalent ions as Mg2+ can stabilize HII phases of lipids (inverted hexagonal phases), which would otherwise form lamellar phases. Second,we investigate the competitive binding of ions and cationic peptides onto a monolayer of lipopolysaccharide (LPS) molecules, a class of highly charged bio-molecules found in the outer leaflet of the outer membranes of gram-negative (G-) bacteria. Cationic anti-microbial peptides (AMPs) can selectively kill bacteria, and it is suggested that they destabilize the LPS layer, easing their permeation across it, a process of great physiological and clinical interest. To this end, we model the LPS layer as a collection of charged “binding sites”, based on which we study the binding of cations (monovalent and divalent) and cationic peptides onto the layer. Our calculations suggest that the peptides can compete with divalent ions on the binding to the layer. It has been empirically known that since the stability of an LPS layer relies greatly on the bridging of divalent ions, the substitution of these ions by the peptides significantly compromises its stability. Our results offer a quantitative basis for this observation, thus providing a possible mechanism of an important step in the action of AMPs against G- bacteria.