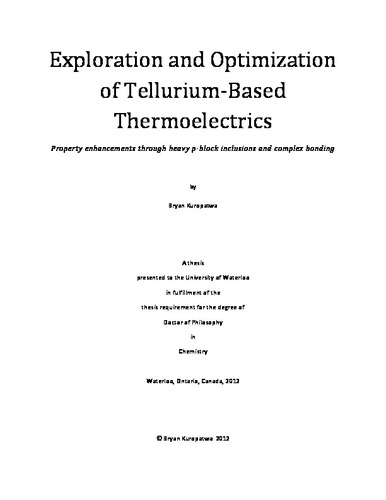 Thermoelectric materials are the only known materials capable of direct conversion of a heat gradient into electricity (Seebeck effect) or vice-versa (Peltier effect). Thermoelectric (TE) devices are comprised of solid-state p-type and n-type semiconductors paired in an electrical circuit and exposed to a temperature gradient. The effectiveness of the materials is evaluated based on the mathematical term ZT=T∙S^2 σ/κ: S represents the Seebeck coefficient; σ represents the electrical conductivity; κ is the thermal conductivity; and T is the average of the coldest and hottest regions of the applied gradient. This ZT term is larger for better materials; most modern devices in use to-date display ZT values on the order of one. A large temperature gradient combined with a large Z term will lead to a high-performance TE material that involves no waste, no side product, and no requirement for moving parts. Discovery and optimization of new thermoelectric materials is a critical component of current thermoelectric research. As such, researchers are constantly searching for a new material that has the following properties: the ability to withstand higher temperatures, thus maximizing the T term; exhibit a large Seebeck coefficient and electrical conductivity through doping techniques; and present minimal thermal conductivity, κ. In recent years, research attention has moved from S^2σ to κ, which can be optimized through a variety of techniques including complex crystal structure, heavy element inclusion, and introduction of structural defects such as nanodomains/nanostructuring. Due to their tendency to form complex crystal structures and bonding, Te-based materials have become popular targets for TE research and optimization. Compounds with Te anions that also include other heavy elements such as alkali (A) metals, alkaline earth (R) elements, or heavy p-block elements including the triels (Tr), tetrels (Tt), or pnictogens (Pn) have become a principal source of new and ground-breaking thermoelectric materials. Likewise, optimization of existing TE materials with these aforementioned compositions has led to ZT values twice those of the materials' original reports. Of the known TE materials, Bi2Te3 is one of the staples in the field. It shows narrow band-gap semiconducting properties that can be tuned to p- or n-type values based on the impurities introduced, and its κ values are inherently low due to the presence of heavy elements and their structural layering motifs. A series of compounds, (SnTe)x(Bi2Te3)y, based on this idea can be produced via the alteration of x:y. In this work, several of these compounds are introduced and studied as potentially useful thermoelectric materials: SnBi2Te4, SnBi4Te7, and SnBi6Te10 are the major targets because of their systematic layering motifs and complex structures. Phase range studies, crystal structure (Rietveld) refinements, and synthesis optimizations were commenced to ensure that the materials were well-characterized and produced phase-pure before the attempted ZT improvements. By altering the quantity of active charge carriers in these systems, changes in ZT can be observed – this is achieved through doping with, primarily, heavy Tr elements Ga, In, and Tl. Thusly, the physical properties are measured and compared for a number of series: [Tr]xSn1-xBi2Te4, [Tr]xSnBi2-xTe4, [Tr]xSn1-xBi4Te7, [Tr]xSnBi4-xTe7, [Tr]xSn1 xBi6Te10, and [Tr]xSnBi6-xTe10. Of the triels, Tl is the largest useful element in the group and is known for showing both Tl+ and Tl3+ cationic states and, in thermoelectric applications, for possessing uniquely low κ values. Thallium telluride compounds such as Tl5Te3 are therefore quite relevant to this field. The family of compounds includes Tl9BiTe6 – one of the better materials with ZT = 1.2 (500 K) using a hot-pressed pellet. Herein, the system is expanded to include Tl10-xSnxTe6 which shows good TE potential with ZT(Tl7.8Sn2.2Te6) = 0.6 (617 K) with a cold-pressed pellet. The incorporation of tetrel elements is investigated through measurements on Tl10-x-ySnxBiyTe6 and also applies to the lesser-studied Tl9SbTe6 compound via research on the systems Tl9SnxSb1 xTe6 and Tl9PbxSb1 xTe6. Tl is studied in three concentrations with Tl10 x ySnxBiyTe6: Tl9…, Tl8.67…, and Tl8.33…, with varying Sn:Bi at each increment. Tt elements are systematically added to the Tl9[Tt]xSb1 xTe6 structure with 0.0 ≤ x ≤ 0.7. Crystallographic studies, electronic structure calculations, and physical properties are explored for each series. Due to Te’s ability to form complex Te–Te interactions in certain environments, the combination of alkaline earth metals, namely R = Ba, with the coinage metals (Cg = Cu, Ag), chalcogenides (Q = S, Se), and Te, form a plethora of previously unknown crystal structures. Many of these are Zintl-phase narrow-band gap semiconductors with complex Cg–Cg and Q–Q bonding schemes – combined with their heavy element incorporation, the family is of great interest to the thermoelectrics community. Within this thesis, three new crystal systems are presented: Ba3Cu17-x(Se,Te)11; Ba3Cu17-x(S,Te)11 and Ba3Cu17-x(S,Te)11.5; and Ba2Cu7-xTe6. All structures show Cu-deficiencies in their crystal structures with d10–d10 interactions and 3-dimensional networks of the Cg metal. The chalcogenide elements in the structures display unique Q–Q or Te–Te bonding of varying dimensionality. The electronic structures and bonding calculations are reported for each compound, as are the single crystal studies. The first two of the aforementioned compounds are narrow-band gap semiconductors, whereas the latter two display metallic behaviour.