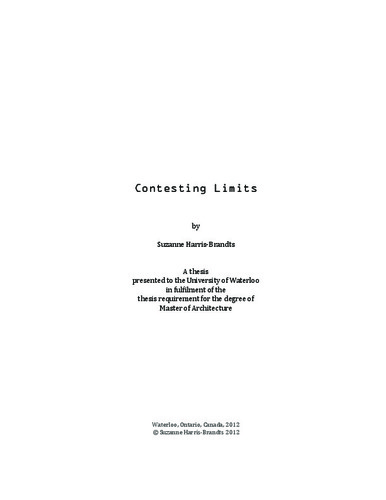 After Israel’s triumphant victory over its Arab neighbors in the 1967 Six-Day War, the State immediately began a policy of territorial seizure in the newly occupied areas. Tracing these seizure practices, their supporting spatial apparatuses and the legalistic manipulations which have enabled de facto annexation to occur, this thesis uncovers not only the involvement of military officials and political figures, but also shows the complex utilization of nature and landscape for geopolitical means. From Jewish-only settlements to closed military areas, nature reserves, unilaterally-seized areas of ‘State Land’ and the cantons of split Israeli-PA jurisdiction, the creeping practices of Israeli annexation in this conflict are occurring without regard for international law or for the purportedly crucial negotiation process. Traditional assessments of the current status quo correctly identify the catastrophic effects of the continued Israeli occupation on the economic, social and environmental systems of the Occupied Palestinian Territories. Yet they fall short of realizing the unique potentialities for Palestinian resistance and subversion inherent within this same state of imbalance. This thesis therefore seeks to elucidate three ways in which the Palestinians can capitalize on unexploited opportunities within the current destabilized conditions of Israeli military occupation in the West Bank. It will argue that the agency of architecture provides a crucial means of political intervention in a protracted dispute where the traditional political figures are unable to affect change via the processes of the peace negotiations. Beyond spatial tactics of resistance, the designs herein propounded have been conceived to thrive in a political environment which is shifting, volatile and indeterminate. Harnessing instability, they suggest new means of social, economic and environmental improvement for the Palestinians while simultaneously addressing their desires to establish an independent state. Cumulatively, these design proposals argue against the futile despair felt by many Palestinians that self-determination will only come by means of the perpetually stalled negotiations process. Instead, they outline new avenues for redirecting the trajectory of this conflict on the ground, through the strategic choreographing of Palestinian actions within, and taking advantage of, the very landscape in which they inhabit.