The use of stable nitrogen and carbon isotopes to examine the sources, sinks and cycling of nitrogen in a small, artificially eutrophic Boreal lake 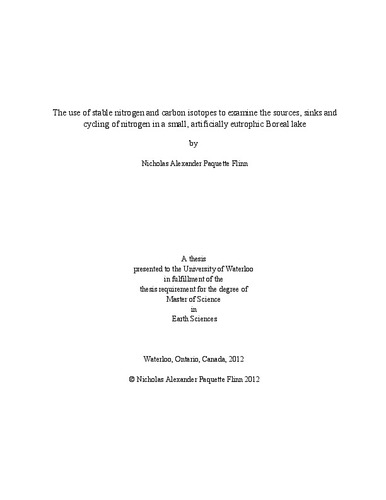 This research examines components of nitrogen cycling in the artificially eutrophic Lake 227 at the Experimental Lakes Area. The components are: 1) the atmospheric sources of nitrogen to the lake through precipitation and dry deposition; 2) the sediment record of past nitrogen sources and primary productivity; and 3) the internal processes of nitrogen cycling. These topics are examined using stable nitrogen and carbon isotopes. The δ15N of atmospheric nitrogen deposition in Canada is not well studied. The results of this work are the first δ15N-NH4+ values for Canada, while the δ15N-NO3- values add to a very limited data base for Canada. The collection of δ15N of precipitation samples was accomplished through the deployment of bulk precipitation collectors over the summer of 2010. Samples were collected at approximately two week intervals, although the length varies depending on precipitation amounts. The δ15N-NH4+ of precipitation was found to peak in midsummer with a mass weighted δ15N of -6.1‰, had a signification positive correlation with ammonium concentration. The δ15N-NO3- also peaked in midsummer with a mass weighted δ15N of -3.1‰. There was no relationship between δ15N-NO3- and nitrate concentration. There was a significant positive correlation between δ15N-NO3- and total solar radiation, suggesting that atmospheric photochemistry has a strong effect on the δ15N-NO3- of nitrate. The detailed record of Lake 227 nutrient concentration, phytoplankton assemblages, and trophic state changes allows for a detailed look at the standard interpretations of sediment core isotopes and the information that can be gained from their study. The comparison between the standard interpretations of sediment core δ15N and δ13C and what was observed in the lake was accomplished through the collection, and isotopic analysis, of sections of a sediment core from the hypolimnion of Lake 227. The sediment core record of primary production in Lake 227, as inferred from the standard δ13C interpretation of sediment core δ13C, is at odds with what was observed in the lake over the past 15 years. The decline in δ13C over this period is likely the result of a decrease in alkalinity in Lake 227 following the cessation of experimental NaNO3 additions and not a decrease in primary production. The standard interpretation of sedimentary record δ15N accurately reflected actual changes in nitrogen sources as the lake progressed from an oligotrophic system; undergoing slight anthropogenic eutrophication, to being severely eutrophied with high levels of nitrogen and phosphorus, to the dominance of nitrogen fixating cyanobacteria following the end of nitrogen loading. In order to synthesize the previous two chapters, the in lake nitrogen cycling was investigated in three ways; 1) sampling of multiple lakes over a one week period in the summer of 2010 for nitrogen isotopes of POM, zooplankton and DOM; 2) monthly sampling of nitrogen isotopes in Lakes 227 and 442; and 3) the completion of a multiyear whole lake isotope mass budget for Lake 227. It was found that nitrogen fixation in Lake 227 does not cause the δ15N of epilimnetic POM to be significantly different than other ELA lakes, most likely due to the small range in the δ15N of the inputs that the lakes share such as precipitation and runoff. The mass weighted δ15N values for 2010 were 3.3‰ for precipitation, -1.5‰ for runoff, and 0‰ for nitrogen fixation. The hypolimnetic δ15N POM was significantly different in Lake 227 compared to other ELA lakes as a result of large reserves of ammonium in the hypolimnion due to increased sedimentation and mineralization, following eutrophication, which allows for large isotopic fractionations to occur. During the open water season the δ15N of epilimnetic POM in Lake 227 is fairly consistent, occupying a range of +2‰ to -2‰, while Lake 442 epilimnetic POM fluctuates more often and to greater extremes in δ15N, from +2‰ to -5.7‰. This larger range in δ15N PON in Lake 442 may be due to either, 1) changing nitrogen demands resulting in assorted levels of isotopic fractionation or, 2) the relative importance of isotopically distinct nitrogen sources changes during the open water season. Limited data suggests that nitrification and denitrification may be important processes that occur in ELA lakes under ice if there has been significant ammonium build up during the stratified season. Isotope mass budgets for 9 years indicate that the mass budget for Lake 227 is not well constrained because of possible issues in the calculation of inputs from terrestrial sources in the spring, uncertain nitrogen fixation inputs, and outflow chemistry from November to May or June in most years is not available. It was determined that any differences in Lake 227 δ15N are likely the result of increased primary productivity and biomass following eutrophication and not the direct result of nitrogen fixation.

Nicholas Alexander Paquette Flinn (2012). The use of stable nitrogen and carbon isotopes to examine the sources, sinks and cycling of nitrogen in a small, artificially eutrophic Boreal lake. UWSpace. http://hdl.handle.net/10012/6763