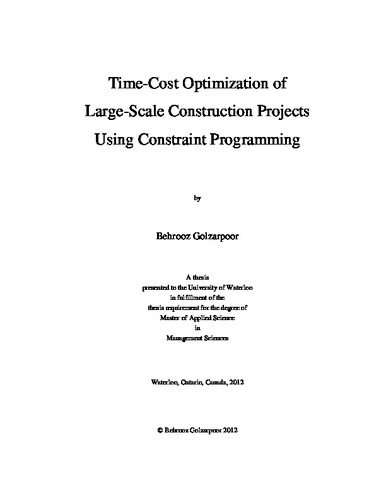 Optimization of time and cost in construction projects has been subject to extensive research since the development of the Critical Path Method (CPM). Many researchers have investigated various versions of the well-known Time-Cost Trade-off (TCT) problem including linear, convex, concave, and also the discrete (DTCT) version. Traditional methods in the literature for optimizing time and cost of construction projects range from mathematical methods to evolutionary-based ones, such as genetic algorithms, particle swarm, ant-colony, and leap frog optimization. However, none of the existing research studies has dealt with the optimization of large-scale projects in which any small saving would be significant. Traditional approaches have all been applied to projects of less than 100 activities which are far less than what exists in real-world construction projects. The objective of this study is to utilize recent developments in computation technology and novel optimization techniques such as Constraint Programming (CP) to improve the current limitations in solving large-scale DTCT problems. Throughout the first part of this research, an Excel-based TCT model has been developed to investigate the performance of traditional optimization methods, such as mathematical programming and genetic algorithms, for solving large TCT problems. The result of several experimentations confirms the inefficiency of traditional methods for optimizing large TCT problems. Subsequently, a TCT model has been developed using Optimization Programming Language (OPL) to implement the Constraint Programming (CP) technique. CP Optimizer of IBM ILOG Optimization Studio has been used to solve the model and to successfully optimize several projects ranging from a small project of 18 activities to very large projects consisting of more than 10,000 activities. Constraint programming proved to be very efficient in solving large-scale TCT problems, generating substantially better results in terms of solution quality and processing speed. While traditional optimization methods have been used to optimize projects consisting of less than one hundred activities, constraint programming demonstrated its capability of solving TCT problems comprising of thousands of activities. As such, the developed model represents a significant improvement in optimization of time and cost of large-scale construction projects and can greatly enhance the level of planning and control in such projects.