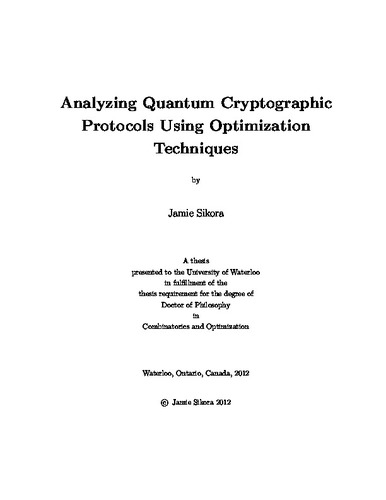 This thesis concerns the analysis of the unconditional security of quantum cryptographic protocols using convex optimization techniques. It is divided into the study of coin-flipping and oblivious transfer. We first examine a family of coin-flipping protocols. Almost all of the handful of explicitly described coin-flipping protocols are based on bit-commitment. To explore the possibility of finding explicit optimal or near-optimal protocols, we focus on a class which generalizes such protocols. We call these $\BCCF$-protocols, for bit-commitment based coin-flipping. We use the semidefinite programming (SDP) formulation of cheating strategies along the lines of Kitaev to analyze the structure of the protocols. In the first part of the thesis, we show how these semidefinite programs can be used to simplify the analysis of the protocol. In particular, we show that a particular set of cheating strategies contains an optimal strategy. This reduces the problem to optimizing a linear combination of fidelity functions over a polytope which has several benefits. First, it allows one to model cheating probabilities using a simpler class of optimization problems known as second-order cone programs (SOCPs). Second, it helps with the construction of point games due to Kitaev as described in Mochon's work. Point games were developed to give a new perspective for studying quantum protocols. In some sense, the notion of point games is dual to the notion of protocols. There has been increased research activity in optimization concerning generalizing theory and algorithms for linear programming to much wider classes of optimization problems such as semidefinite programming. For example, semidefinite programming provides a tool for potentially improving results based on linear programming or investigating old problems that have eluded analysis by linear programming. In this sense, the history of semidefinite programming is very similar to the history of quantum computation. Quantum computing gives a generalized model of computation to tackle new and old problems, improving on and generalizing older classical techniques. Indeed, there are striking differences between linear programming and semidefinite programming as there are between classical and quantum computation. In this thesis, we strengthen this analogy by studying a family of classical coin-flipping protocols based on classical bit-commitment. Cheating strategies for these ``classical $\BCCF$-protocols'' can be formulated as linear programs (LPs) which are closely related to the semidefinite programs for the quantum version. In fact, we can construct point games for the classical protocols as well using the analysis for the quantum case. Using point games, we prove that every classical $\BCCF$-protocol allows exactly one of the parties to entirely determine the outcome. Also, we rederive Kitaev's lower bound to show that only ``classical'' protocols can saturate Kitaev's analysis. Moreover, if the product of Alice and Bob's optimal cheating probabilities is $1/2$, then at least one party can cheat with probability $1$. The second part concerns the design of an algorithm to search for $\BCCF$-protocols with small bias. Most coin-flipping protocols with more than three rounds have eluded direct analysis. To better understand the properties of optimal $\BCCF$-protocols with four or more rounds, we turn to computational experiments. We design a computational optimization approach to search for the best protocol based on the semidefinite programming formulations of cheating strategies. We create a protocol filter using cheating strategies, some of which build upon known strategies and others are based on convex optimization and linear algebra. The protocol filter efficiently eliminates candidate protocols with too high a bias. Using this protocol filter and symmetry arguments, we perform searches in a matter of days that would have otherwise taken millions of years. Our experiments checked $10^{16}$ four and six-round $\BCCF$-protocols and suggest that the optimal bias is $1/4$. The third part examines the relationship between oblivious transfer, bit-commitment, and coin-flipping. We consider oblivious transfer which succeeds with probability $1$ when the two parties are honest and construct a simple protocol with security provably better than any classical protocol. We also derive a lower bound by constructing a bit-commitment protocol from an oblivious transfer protocol. Known lower bounds for bit-commitment then lead to a constant lower bound on the bias of oblivious transfer. Finally, we show that it is possible to use Kitaev's semidefinite programming formulation of cheating strategies to obtain optimal lower bounds on a ``forcing'' variant of oblivious transfer related to coin-flipping.