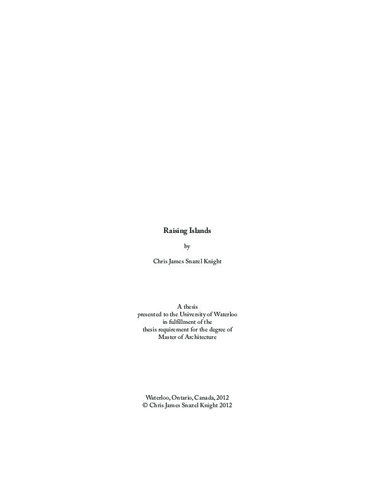 In an era of dawning anthropogenic climate change, people of atoll nations face grievous threats to their future. Rising sea levels, warming oceans, and changing weather patterns conspire with economic isolation, rapidly growing populations, and the loss of traditional livelihoods to perpetuate conditions of dependence and wardship which threaten the very existence of their island homes. This project examines an atoll nation of the equatorial Pacific, the Republic of the Marshall Islands, where the outward appearance of pristine tropical paradise belies a tragic history of nuclear weapons and ballistic missile testing at the hands of the US military. While the islands have been consistently framed in rhetoric which stresses vulnerability, smallness and unsustainability, this project contests the limited scope of the regimes of power in Oceania by considering how the independent, grassroots actions of local groups of islanders have achieved surprising and dramatic results in defiance of the policies and planners at the top. In developing a design proposal for the contemporary condition, this thesis examines the persistent ways in which the islands and people are framed by outsiders. This project engages with the social, political and natural history of the atolls: common tropes are challenged by the actions and agency of a people who have dealt with imperialist outsiders in sophisticated and conscious ways. It explores the traditional cultural practices which enabled the ancestors of the Marshallese people to flourish, and suggests that it is at the level of actions by ordinary people that the most fertile potentials lie, and are in fact already being played out. What forms of urbanism might be appropriate in this environment? How can islanders effectively manage their landscape and engage with the natural processes - as their ancestors once did to a remarkable degree? By pairing traditional techniques with modern technologies, a proposal is synthesized which could empower the contemporary Marshallese to transform their landscape and develop sustainable livelihoods in this extreme and dynamic environmental condition: to build a future which offers the best aspects of both traditional and contemporary ways of life.