A Giant's Quiet Decay: The Latency of Superior North 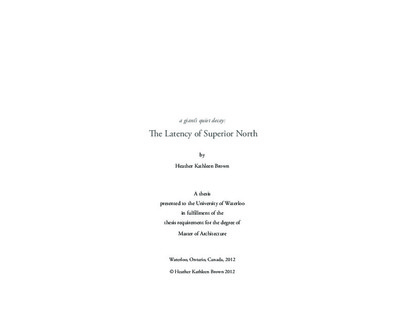 What happens after a place has been exploited, isolated, and neglected? What occurs when that place is bound – confined – by impenetrable voids of dereliction? Its core, slowing diffracting, with no opportunity to perceive outward – beyond the derelict terrain to the boundless expanses of earth and water that have perpetuated its vitality. And what then, if for a moment, this decaying place is given a view beyond these boundaries? Deindustrialization has invariably altered modern cultural conceptions of control over nature. The terrain remaining after decades of resource exploitation is composed of deep voids and fissures that reside physically, psychologically, and theoretically in-between the accepted realms of culture and nature. This thesis explores the perversion and dissolution of these two opposing realms within the sublime and fantastical derelict landscape of a declining town. Deindustrial voids are considered as both barrier and bridge; serving as persistent symbolic reminders of the volatile and hubristic relationship between culture and nature, and offering potential reconnection to the natural landscape of a city’s foundation. Reacting to collective nostalgia through memorialisation, totemism, and erasure, typical design interventions continue to prioritize cultural domination and emphasize the designer as creator in order to reassert control over the chaos of deindustrialization, often resulting in placeless infilling of the void. Ideas of extimacy, alterity, and ruination, with influences from the fields of industrial archaeology and landscape architecture, ground contemporary reactions to the deindustrial void and explore the role of landscape in the creation and fragmentation of ideas of place for the dissolving North American industrial city. Both inspired and situated within the declining former town of Fort William, Ontario, this thesis surveys an abandoned industrial corridor that encircles the town, severing it from the liminal water’s edge and landscape beyond. Viewed as a palimpsest, this site is considered beyond its most recent industrial usage to expose a place-specific natural/cultural terrain comprised of material and immaterial layers of evolution and exploitation. This thesis positions the architect as perceiver, hoping to inspire sensitivity, pause, and reflection and resists ideas of forced transformation as a means of outwardly expressing progress. It immerses itself within the in-between places that blur preconceived boundaries – natural and cultural, past and future, controlled and chaotic – in order to encounter the inherent existential qualities of a site in transition.