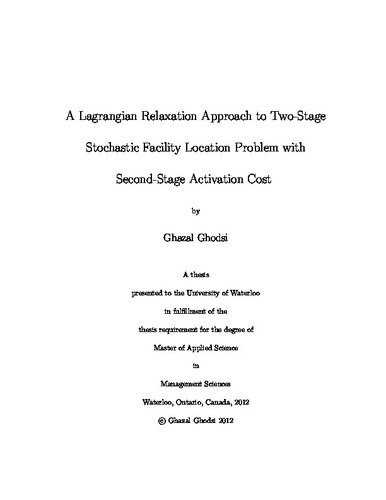 We study a two-stage stochastic facility location problem in the context of disaster response network design. The uncertainty inherent in disaster occurrence and impact is captured by defining scenarios to reflect a large spectrum of possible occurrences. In the first stage (pre-event response), planners should decide on locating a set of facilities in strategic regions. In the second stage (post-event response), some of these facilities are to be activated to respond to demand in the disaster affected region. The second-stage decisions depend on disaster occurrence and impact which are highly uncertain. To model this uncertainty, a large number of scenarios are defined to reflect a large spectrum of possible occurrences. In this case, facility activation and demand allocation decisions are made under each scenario. The aim is to minimize the total cost of locating facilities in the first stage plus the expected cost of facility activation and demand allocation under all scenarios in the second stage while satisfying demand subject to facility and arc capacities. We propose a mixed integer programming model with binary facility location variables in the first stage and binary facility activation variables and fractional demand allocation variables in the second stage. We propose two Lagrangian relaxations and several valid cuts to improve the bounds. We experiment with aggregated, disaggregated and hybrid implementations in calculating the Lagrangian bound and develop several Lagrangian heuristics. We perform extensive numerical testing to investigate the effect of valid cuts and disaggregation and to compare the relaxations. The second relaxation proved to provide a tight bound as well as high quality feasible solutions.