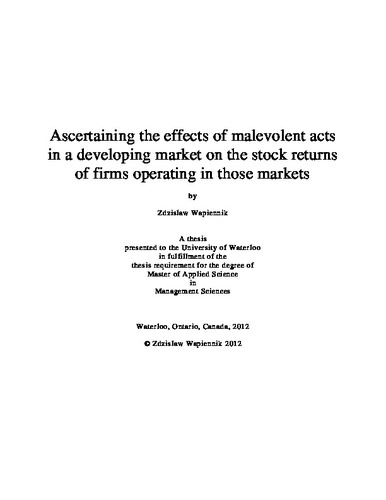 Experiencing malevolent acts is a common feature when conducting business in parts of the developing world, but the effects that these acts have on a firm’s stock price have not received sufficient attention by the literature. Filling the gap, this thesis looks at the oil industry in Nigeria and the effects of multiple malevolent acts over a five year period (ranging from 2006 to 2010) on the stock prices of the four major international oil firms operating therein: Shell, Chevron, Exxon, and Total. The stock price data was presented in the form of abnormal returns, the difference in stock price from the expected price. Ordinary least squares regression as well as Wilcoxian sign-rank techniques were used to test the abnormal returns data for our firms. This data was segregated by firm name as well as by event types to isolate the effects that each has on the returns of the firms under study. This thesis raises several hypotheses, such as that a negative event in general will lead to negative returns and that negative events affecting one firm will lead to positive returns for that firm’s competitors. We managed to determine that the only event types that had a significant impact on any firm’s returns were kidnappings and government policies (either political or economic) targeted to harm the firms. We discovered that kidnapping events affected Shell’s returns negatively, whereas they have positive impact on the returns of Chevron and Exxon. We postulate that the latter results are a reaction to the relatively strong negative effect on Shell’s returns. In response to negative government actions, Shell and Total experienced positive returns , we postulate that this is due to the market’s perception that these policies will lead to less supply and consequently to higher prices for Nigerian oil. Our results indicate that violent events have no impact, at least on the four major firms, whereas kidnappings and government policies do.

Zdzislaw Wapiennik (2012). Ascertaining the effects of malevolent acts in a developing market on the stock returns of firms operating in those markets. UWSpace. http://hdl.handle.net/10012/6748