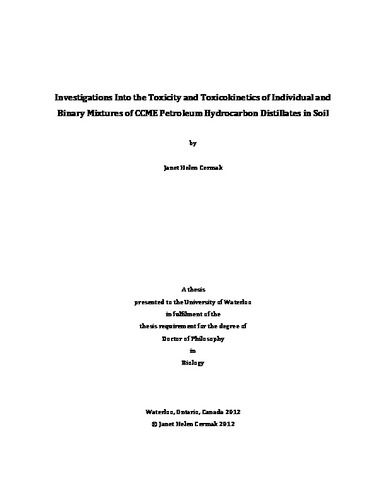 The Canada-wide Standards for Petroleum Hydrocarbons (PHC CWS) in soils are remedial standards based on four petroleum distillates (Fraction 1 [F1; ECN C6-C10], Fraction 2 [F2; ECN >C10-C16], Fraction 3 [F3; ECN >C16-C34], and Fraction 4 [F4; ECN >C34-C50]). Knowledge gaps regarding petroleum toxicity to soil organisms were identified including concerns that the ecological values for F3 were overly conservative, possibly due to differences in toxicity between the low and high boiling point constituents of this distillate, and unexpected less-than-concentration-additive toxicity of binary mixtures of distillates to earthworms. An understanding of petroleum toxicokinetics with soil organisms was also needed to interpret toxicity results. Toxicity studies with one plant and two invertebrate (earthworm and collembolan) species were conducted with F3 and two subfractions of F3, F3a (ECN >C16-C22) and F3b (ECN >C22-C34), to determine if the toxicities of F3a and F3b were sufficiently different to recommend regulating the two separately. The difference in toxicities between the two was generally within the range of variability noted for the toxicity tests and thus it was not recommended to regulate the two separately. The toxicity data indicated that the exposure duration of standard test methods may be insufficient for determining the toxicity of higher distillate ranges. Toxicokinetic studies conducted with earthworms and F2, F3a, and F3b confirmed that standard test durations generally were not of sufficient duration to attain maximum body residues with F3b and sometimes F3a. Internal exposure scenarios also differed among distillates, with various accumulation curves noted and attributed to differences in loss of distillate from the soil and changes in bioavailability. Aromatics were disproportionally accumulated by earthworms relative to the ratio of aromatics to aliphatics in soil, suggesting that aromatics were the main contributors to earthworm toxicity. Toxicity and toxicokinetic studies with binary combinations of F2, F3a, and/or F3b and earthworms demonstrated that, on a soil concentration basis, toxicity was less-than-additive. Toxicokinetics indicated that this was due to a decrease in the bioavailability of distillates when a second distillate was present presumably as a non-aqueous phase liquid. However, on an internal tissue concentration basis, results were closer in agreement with concentration-addition.

Janet Helen Cermak (2012). Investigations into the toxicity and toxicokinetics of individual and binary mixtures of CCME petroleum hydrocarbon distillates in soil. UWSpace. http://hdl.handle.net/10012/6745