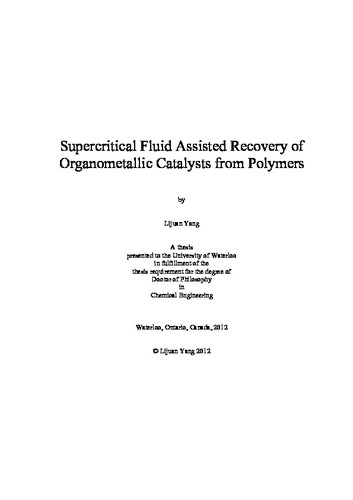 The recovery of organometallic catalysts from polymer matrices is of great importance in promoting the application of homogeneous catalysts in industry. Such a green recovery technique will not only popularize the techniques of green catalytic hydrogenation of polymers by Rempel’s group, but also consummates the technique of heterogenization of organometallic catalysts. The high value product of hydrogenated nitrile butadiene rubber (HNBR) with dissolution of Wilkinson’s catalyst [RhCl(TPP)3] was selected as the model polymer matrix for developing a green separation technique. The supercritical carbon dioxide (scCO2) soluble fluorous Wilkinson’s catalyst [RhCl(P(p-CF3C6H4)3)3] was synthesized and shown exhibit a very limited activity in the catalytic hydrogenation of bulk HNBR. Its recovery from a HNBR matrix using scCO2 however failed. In spite of the assistance of the scCO2 dissolvable chelating ligand thenoyltrifluoroacetone (TTA), the weak compatibility of scCO2 with rhodium complexes failed again as an extraction solvent for the HNBR matrix. Inspired by the merits of CO2-expanded liquids (CXLs) and the versatility of CO2 in changing the physical properties of polymer melts, CXLs were tested as extracting solvents for separation of Wilkinson’s catalyst from bulk HNBR. CO2-expanded water (CXW) and CO2-expanded alcohols including methanol and ethanol (CXM and CXE) were examined with the assistance of a variety of chelating agents. The investigated chelating agents include ethylenediaminetetraacetic acid (EDTA), ethylenediaminetetraacetic acid disodium salt (EDTA-Na2), diethylenetriamine (DETA), N,N,N',N',N"-pentamethyldiethylenetriamine (PMDETA), and N,N,N’,N’-tetramethylethylenediamine (TMEDA). CXM and PMDETA were recognized as the optimal combination of extracting solvent and chelating agent for recovery of Wilkinson’s catalyst from HNBR. An extraction system consisting of CXM and PMDETA was carefully investigated with respect to the effects of temperature and pressure on the extraction performance over the temperature range of 40 to 100 °C and the pressure range of 20 to 200 bar. Increasing temperature effectively increased the extraction rate and became less influential when the temperature was above 80 °C. Increasing pressure at a fixed temperature was found to improve the extraction rate followed by suppressing it. Nevertheless, further increasing the pressure to an extreme high value above the respective critical point was able to promote the extraction rate again. The complex effects of pressure were thoroughly investigated by the means of analyzing the dissolution behavior of CO2 in HNBR and the variation of the extraction phase composition at different operational conditions. 0.14 g/mL was determined as the CO2 density by which the optimal pressure at a fixed temperature can be estimated. Based on a careful interpretation of the experimental results, an extraction mechanism was illustrated for interpreting the present extraction system. Additionally, the reactions involved in the extraction process were illustrated to reveal the principal challenges present in the extraction process and pointed out the potential solution for eliminating the obstacles. Two special operations-sequential operation and pressure varying procedure were tested for their effectiveness in enhancing the extraction ratio. A pressure varying procedure was found to be beneficial in further improving the extraction ratio, while sequential operation did not show any promise in enhancing the recovery. At last, the developed technique was shown to be highly efficient in applying it to HNBR particles coagulated from the HNBR latex. A residue of 59 ppm rhodium was obtained after 9 hours of operation. This study establishes a technology platform for separating the expensive catalyst from the polymer matrix, using “green” CO2-expanded liquids.